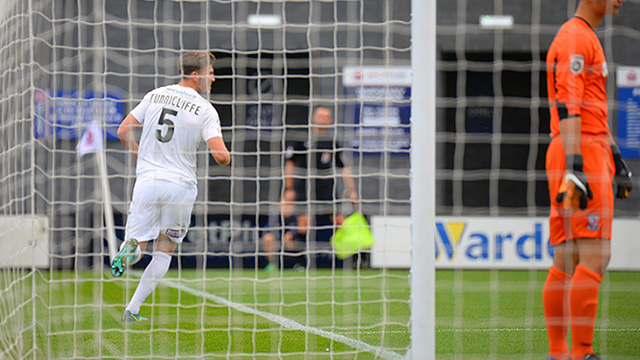 Tunny keen to ‘make own luck’

Unlikely goalscoring extraordinaire Jordan Tunnicliffe was frustrated that his third National League goal of the season was in vain.

Summer signing Tunnicliffe gave the Coasters a half-time lead at the weekend against Woking, chesting home from Henry Jones’ corner in a dominant first half display.

However, a nightmare 60 seconds shortly after the interval saw Woking net twice to turn the game around and claim all three points.

Defender Tunnicliffe has been a regular on the scoresheet since joining from Kidderminster Harriers, bagging during pre-season and in the opening day draw against Boreham Wood.

The 23-year-old has since netted in the Coasters’ two previous outings, including the equaliser in a 2-2 draw at Eastleigh little over a week ago.

A run of five games without victory has left Dave Challinor’s newly-promoted side just one point outside the drop zone and Tunnicliffe insists it is time for the Coasters to start making their own luck.

Tunnicliffe said: “I thought we dominated the first half. We had a ten-minute spell before the break with a flurry of corners and free-kicks where we should have gone further than one ahead.

“In the second half, they scored a very lucky goal but we had a lapse in concentration straight after and let another in. After that we just couldn’t seem to get back into the game.

“Jay (Lynch) barely had a save to make, however we have ended up on the wrong side of the result again. You make your own luck in football and we need to take responsibility.

“We keep on saying we have been unlucky but it keeps on happening to us so it can’t just be that. We have to go back to the training ground and sort it out.

“There are fine margins in football between victory and defeat and we are on the wrong end of them at the moment.”

Fylde face a trip to the capital this weekend with a huge clash against former Football League side Leyton Orient and Tunnicliffe is keen to get straight back on the horse.

Tunnicliffe added: “I’m excited about the game at the weekend. After a defeat, the first thing you want to do as a footballer is get back out there on the pitch and put things right and we will be doing everything possible to achieve that.”