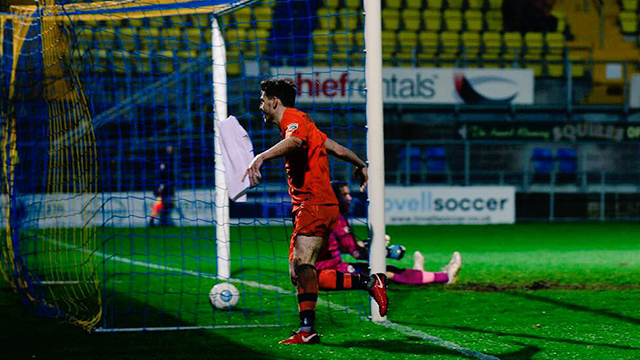 Two-goal hero Jordan Tunnicliffe insists results are paramount at this stage of the season after AFC Fylde came from behind for the second time in four days to secure victory over Torquay United.

The Coasters moved up into fourth in the National League standings following a fourth successive victory and Tunnicliffe – who netted either side of the break down in Devon – admits the three points have become far more important than performances.

Tunnicliffe, who joined from Kidderminster Harriers in the summer, said: “I’m buzzing with the result and, as ever, the result is more important than anything. We got the three points and sometimes it doesn’t matter how you perform.

“It’s important at this club that we play well but at this stage you just need three points from games and that gets us one step closer to securing our place in play-offs.

“We weren’t really nervous when we went behind because we knew if we stuck to our guns then we would create chances and that proved so.

“The pitch was really tough and the fans that came down saw how heavy the pitch was so we couldn’t get the ball down as much as we’d like to. We had to use the channels and the game plan worked well.

“In terms of goals, it’s definitely my most prolific season! A lot of that is down to the delivery and service from the boys.

“I don’t really care if it’s me that scores though, I just want to win and that was a very welcome three points.

“It’s a very nice position to be in now, but we can’t look at the table and get ahead of ourselves. There are still three games to go and we have to make sure we get three points at Maidstone at the weekend.”

Tunnicliffe was also quick to praise the traveling supporters: “We really appreciate the fans efforts and their support. They didn’t even know if the game would be on but they have still come down and they really spurred us on.”