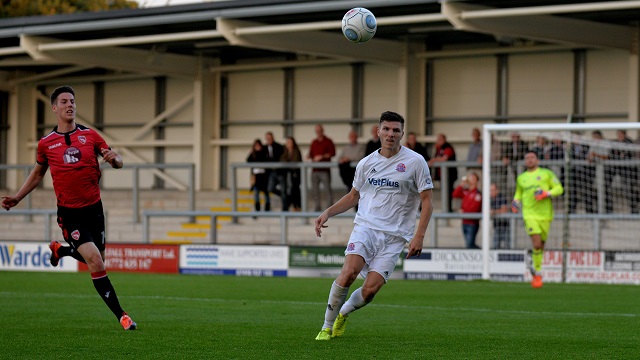 Tunni off the mark

AFC Fylde new boy Jordan Tunnicliffe was delighted to get off the mark during the Coasters’ 2-1 victory over Morecambe earlier in the week.

The defender, signed from Kidderminster Harriers over the summer, netted the decisive second goal against the Shrimps after star striker Danny Rowe rounded of a fine team move to open the scoring.

Tunnicliffe looks set to start the new season alongside club captain Josh Langley at the heart of defence after some impressive displays during Fylde’s friendlies and insists he can’t wait to get going.

Tunnicliffe said: “We were really pleased to get a positive result against a Football League side and it was nice to get my first goal too. We set out to win every game in pre-season and a lot of the lads got 90 minutes too which was the most important thing.

“The main goal in pre-season is to be ready for that first game of the season and I think we are. Pre-season is nearly over now and we are raring to go for the season.

“It’s been good playing with Josh (Langley) so far. We have been communicating well and we have worked hard on forming a partnership in training. There is still room for improvement. Hopefully I can help improve the defence here.”

Tunnicliffe has been joined by two other Kidderminster recruits at the club and admits the familiar faces have helped him settle at Mill Farm.

“Zaine (Francis-Angol) and Josh (Ezewele) have helped me to settle here a lot but all the lads in general have been class form the very first day. Everyone has welcomed us with open arms.”

The Coasters take a step into the unknown next season for a debut campaign in the top tier of Non-League football and Tunnicliffe insists that his side must take each game as it comes rather than getting ahead of themselves.

“My targets on a personal and team level are the same. We will just look at the next game and nothing any further ahead. You can only win the next game and we will try and get three points every time we go out there onto the pitch.”