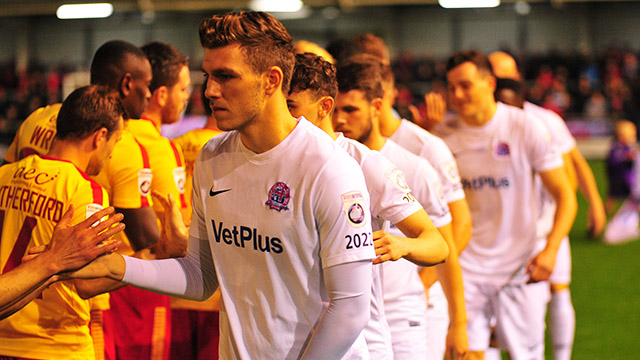 A solitary goal from Woking academy graduate Lazar Stojsavljevic brought the Coasters’ seven-game unbeaten run to an end and saw them slip out of the play-off places.

Tunnicliffe had helped Fylde keep two clean sheets in his previous three outings, but was powerless as Stojsavljevic looped a header over Jay Lynch and in off the post.

The Coasters remain within touching distance of the promotion places – just two points behind Bromley in seventh – but Tunnicliffe admits his side just weren’t good enough at the weekend.

Tunnicliffe said: “Woking made it difficult for us and set up well and played some good football. We made a slow start and didn’t really get going in the first half.

“Their goal after the break probably sparked us into life and we started to play but it just wasn’t our day.

“I was disappointed with the goal we conceded. It was slightly lucky but they are always preventable. I though I could have do a little better myself on the day but we can’t let it get to us because we have been brilliant recently.

“Fair play to Woking though, they took advantage of us not being at our best.”

The 24-year-old has been a mainstay at the back since his summer move from Kidderminster Harriers, with several different defensive partners, and is now happy alongside Wigan Athletic loanee Sam Stubbs.

Tunnicliffe added: “I’m enjoying playing alongside Sam. He’s young and learning but he’s done really well so far. To be honest I’ve enjoyed playing with every one of them because they are all good centre-halves with different strengths.

“It’s good that there is competition for places. We all want to be in the side and thankfully I’ve managed to keep my shirt all season so far. Hopefully I can keep that up.”

Fylde aim to get their promotion push back on track this weekend when they welcome Eastleigh to Mill Farm and Tunnicliffe is expecting another tough test: “Every team brings a different challenge and that will be no different on Saturday against Eastleigh but hopefully we come out on top.”