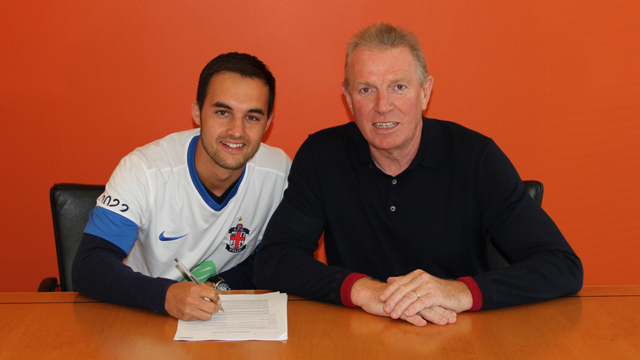 We are delighted to announce the signing of Liam Tomsett. Liam played the whole of last year on loan from Blackpool at Hyde FC where he was one of their star players. As soon as we heard Liam had been released by Blackpool we spoke to his agent and were able to put a deal together. Despite having higher offers from other clubs Liam has chosen to come to Fylde.

“I’m delighted that Liam has agreed to join us as he’s someone that was on our radar once we knew he wasn’t being kept on at Blackpool. He’s a young player who is a very good footballer and I’ve no doubt we can help him achieve his aim of getting back into professional football. He’s had experience of the Conference Premier with Hyde over the past two seasons and that will undoubtedly stand him in good stead as we prepare for our debut season in the Conference North. He’s been away so will be a little behind in terms of pre-season but I’m sure everyone is looking forward to seeing him in a Fylde shirt.”

“It’s great to have Liam on board with us. A lot of people have spoken extremely highly of Liam and we can’t wait to see him in a Fylde shirt, I’m sure the fans will be excited.”