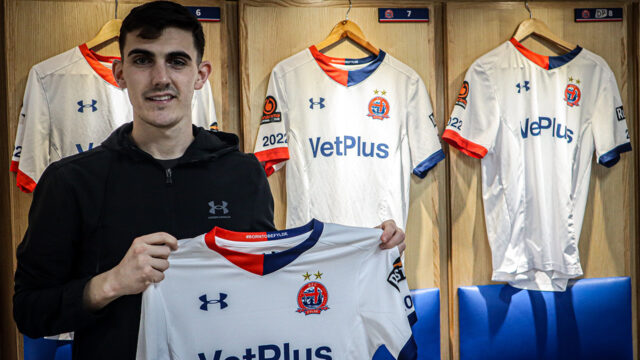 AFC Fylde are delighted to announce that midfielder Tom Walker has returned to Mill Farm on loan until the end of the season from National League side Stockport County.

Walker, 26, joins the Coasters after both clubs agreed a deal for him to return to Mill Farm following his initial loan spell in 2020.

The midfielder started his career at Bolton Wanderers at the age of nine before going on to make his debut for the Whites ten years later, coming on as a substitute in a 1-1 draw with Leeds.

He then moved on loan to Bury before signing for Stockport County in 2017 on a short-term deal. Walker caught the eye and earned a permanent transfer to Salford City, where he went on to make over 60 appearances, scoring 11 goals along the way.

A return on loan to Stockport County until January 2020 followed. Coasters boss Jim Bentley then made a move to sign Walker on a two-and-a-half-year deal after the expiration of his loan at Edgeley Park. He made nine appearances and scored four goals during his time at Fylde.

His time at Mill Farm came to an end when Harrogate Town were promoted to the Football League and they exercised a clause in Tom’s contract, leaving Fylde unable to stop Walker from exiting for the Sulphurites at the end of the 19/20 season.

Walker then went out on loan to Notts County before Simon Rusk resigned him for Stockport at the start of the 21/22 season, and we are delighted that Tom has now rejoined the Coasters.

On Walker’s arrival, manager Jim Bentley said: “Tom is a good player and character who we know well from his time here before. He is an exciting talent, who is at a good age and in the right environment can get even better.

“Technically he is good, he’s athletic, mobile and will fit nicely into our setup. I’m very much looking forward to working with him again.”