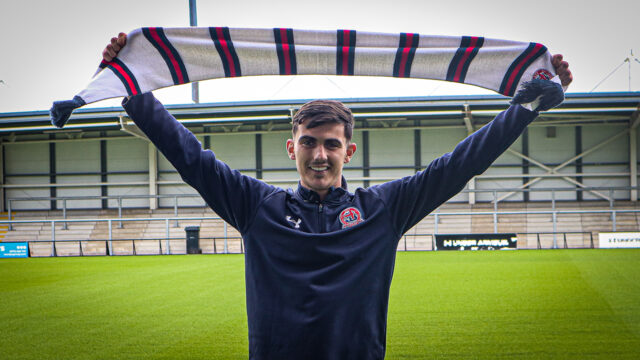 AFC Fylde is delighted to announce the permanent signing of Tom Walker after a successful loan period at the Club.

The midfielder returns and signs a one-year deal, with the option of a further year being held in the Club’s favour.

After flourishing under James Rowe last season, Walker becomes Fylde’s sixth signing of the summer and sees the squad start to take shape ahead of the 2022/23 season.

Walker initially arrived at Mill Farm on a permanent deal in 2020 but later left to join Harrogate Town following relegation to the National League North.

Just two years later, and after brief spells at Notts County, Stockport County and Altrincham, the 26-year-old re-signed for Fylde on loan for the remainder of the 21/22 season before now signing permanently.

Manager James Rowe was thrilled to re-sign Tom and expressed: “Tom has undoubted talent and hasn’t quite sustained the high levels he can reach on a consistent basis.

“There are many reasons for this, but it is now about him looking forwards, focusing on what he can control and working to his maximum – our environment will allow him to do this.”

Walker was also delighted to commit his future to the Club and said: “It was disappointing to finish on last season through the play-offs, but I’m happy to be back.

“I spoke to the manager (James Rowe) after the season finished and said I’d like to come back, and hopefully, we can chase that automatic promotion now.”