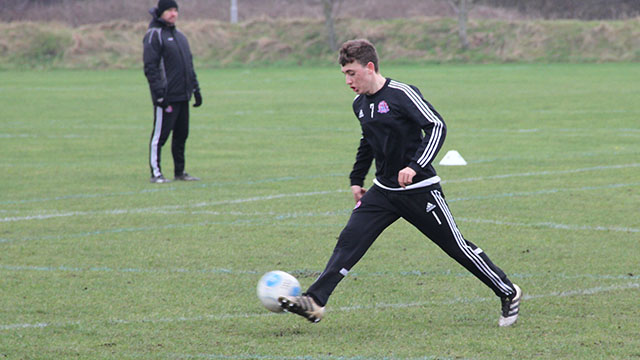 The 19-year-old midfielder made a deadline day switch from Swansea City and is relishing the prospect of first team football with the Coasters.

“I’m really looking forward to getting started,” said Holland. “I’d been hoping to go out on loan since the start of January and this is somewhere that I think will be great for me.

“Fylde are a good team, they’re top of the league and I’m hoping that I can get some proper game time here to help me develop.

“I could have gone to another team in the Football League and tried to get experience that way, but James Hardy here said some really good things about the club so I decided to come here.

“I’d heard a lot about the club even before this season. A lot of people have been speaking about them because of what they are trying to achieve.

“The stadium here is really nice. I drove past it on the way up and it looked really good, really modern. To be top of the league by nine points, the aim is to get promoted and you can definitely see where they’re going.”

Holland has been plying his trade in the Swans’ Under 23 set up this season but admits he is keen to make the step up with the Coasters.

“It’s really important to be getting first team football and that’s the reason that I came. Whenever you speak to managers, they always want to sign players that have played competitive football, not just in the under 23s.

“I’ve been playing in the under 23s for two or three years now so I think it’s about time that I really got my career going and this is the perfect place to do that.

“It will be a lot different to the football at Swansea. It’s a lot more competitive, a lot more about winning and I want to test myself.

“I think that technically I’m good on the ball in tight areas and I’m quite composed. I like to get on the ball and get the team playing.

“I like to try and create goals but I’ve also had to develop the other side of my game because I’m quite small so I have to be aggressive and put myself about.”

Holland could be handed a baptism of fire this weekend as the league leaders prepare to take on in-form Salford City and the youngsters is savouring the top of the table clash.

“It’ll be a good game,” added Holland. “It’s quite a local game and there will be a lot of fans there and that is why I came. I enjoy the pressure and it’s top of the league versus third so it should be tight.

“Whenever I get put in, I’ll be ready to do a job. I’ve heard a bit about Salford as well, obviously with it being run by the Class of 92’.

“Hopefully we can play well and get the right result.”