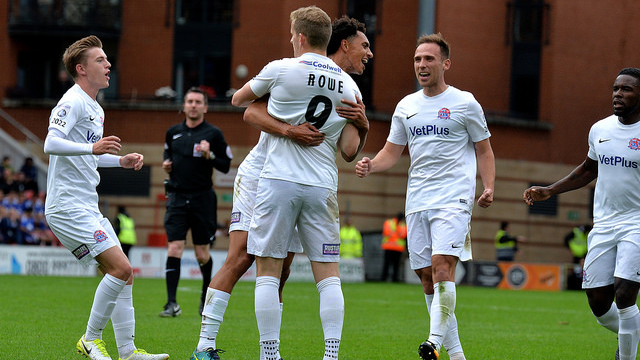 Danny Rowe’s tremendous double halted a five game winless streak in the National League and Challinor was proud of his side’s gritty display.

“We deserved that victory. Not just on the balance of the game because in fairness Leyton Orient probably could have got something from it.

“It was a real backs to the wall, gritty display but we have someone up front in Danny Rowe that is capable of producing that kind of magic.

“It probably not gone for him quite as much as he would of liked this season but has smashed in two great goals.

“We really dug in a held on and that’s reward for all the hard work that everyone has put in since the start of the season. We’ve not got what we have deserved on more than one occasion this season and I have been open about the reasons for that.

“We said before the game that we couldn’t continue as we were and that we had to start picking up results and we have done that so I’m absolutely thrilled.

“We didn’t know exactly how they would set up and we knew that we might have to alter our shape during the game. We started we three solid midfielders and hoped that the three up front would cause problems and got that goal.

“We were under a lot of pressure in the first half and couldn’t really get out so we changed it at the break because we had something to hold on to.

“The last 15 minutes, after they scored, were a little nervy but I suppose it made for an exciting spectacle. People inevitably get a little edgy in that situation but the lads stuck to their task really well and held onto three massive points for us.”