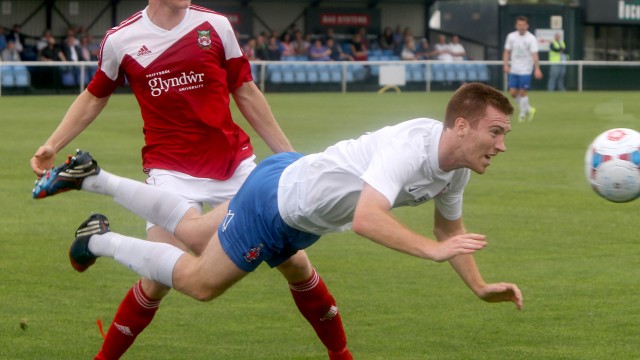 Man of the Match, Tom Hannigan, spoke to Ben Yaffe after Saturday’s win over Gloucester City.

Ben: Great performance, man on the match, two goals.  Was it the perfect game for you today?

Tom: It was a hard game, our lads stuck in there and we grinded out a result which at the end of the day is the main thing.  Really glad that we’ve had a good start.

Ben: You’ve come here from Vauxhall Motors last season where it ended in a not so great way, how has this season compared to last season so far for you?

Tom: All the lads are quality players and it’s good to be top so early on in the season.  Hopefully we can carry on our form.  I’m enjoying playing with Josh Langley and I think we’ve looked good so far.

Ben: What are your overall ambitions for this season for The Coasters?

Tom: For now it’s just about winning as many games as possible.  Maybe half way through the season we can set an aim, but at the moment it’s about getting points on the board and seeing where it takes us.

Ben: Who are you most looking forward to playing against this season and why?

Tom: Speaking to the lads, it looks like Chorley home and away will be fun.  There’s quite a lot of history between the two clubs and it seems like a decent rivalry so I can’t wait to play them.

Ben: Are you planning on sticking at Fylde for a while or do you want to go and play Football League football?

Tom: I want to stay here for a long while and hopefully I can help the club move on to a higher level.  I’m looking forward to playing in the new stadium whenever we end up moving there.