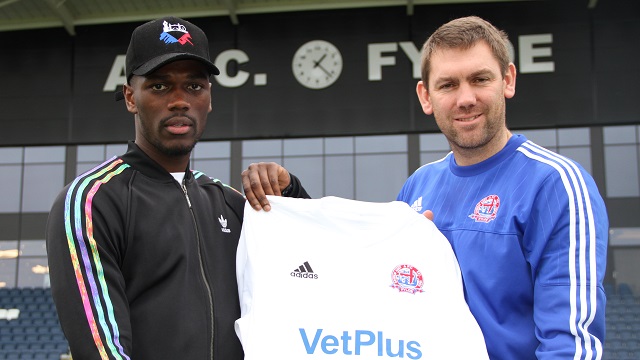 AFC Fylde new man Darren Stephenson could not hide his delight after agreeing a deal with the Coasters.

The 23-year-old hotshot has joined the club on loan until January 7th from National League side Tranmere Rovers and admits he is ready to grab his chance with both hands.

Stephenson said: “My play time at Tranmere hasn’t been as frequent as I would have liked over the last few games and the manager rang me to say there was an option to go out on loan.

“It was an opportunity to go and get some game time so I went away and gave it some thought, but at the end of the day this is a great chance for me to get back out on the pitch with a club that is doing very well.

“This is a very good move for me. It will bring my confidence back up and help me develop as a player too.”

Coasters boss Dave Challinor has long been an admirer of hotshot Stephenson and the frontman is delighted to finally team up with the National League North leaders.

Stephenson added: “I heard there was some interest from Fylde in the summer, but nothing materialised and the opportunity to join Tranmere was too good to turn down.

“It was the right move for me at the time and they are a big club, but it has just been a little frustrating over the last few weeks and now I can’t wait to get some regular football.

“I have always believed I can score goals and do well, it’s just about getting that chance and the backing to do that. I’m sure I will get that here.

“There is a lot of competition across the frontline here, but I try not to worry about that. I am confident in my ability and I think I can bring something to the side.

“I play with strength, power, speed and hopefully I can add even more goals to this Fylde team.

“I’m very much looking forward to getting started now. I’ve had a look around the ground and heard what the manager and the club are trying to do and I want to be a part of that. I also know a few of the lads already so that will help me settle in.

“I want to hit the ground running, get some goals and hopefully keep Fylde up at the top of the table and one step closer to promotion.”