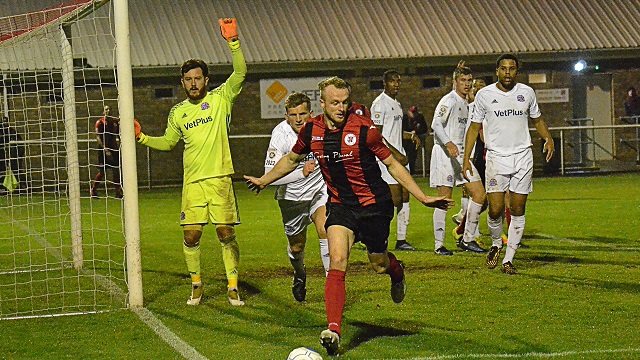 ‘Stand up and be counted’

AFC Fylde goalkeeper Rhys Taylor admits his side just weren’t good enough as they crashed out of the FA Trophy following a 4-0 humbling at Brackley Town on Tuesday evening.

The Coasters trailed by three goals after a lacklustre first half-display and despite ringing the changes at the interval, conceded a fourth and struggled to find their usual firepower in front of goal.

Dave Challinor’s side currently lead the pack in the National League North by seven points heading into the festive fixtures, but have suffered early exits from both the FA Cup and now the FA Trophy.

Taylor expressed his concern at the number of goals his side are shipping this campaign and insists something has to change.

“It was obviously a tough night for us. There is nowhere to hide, we simply weren’t good enough.

“It’s the first time we have experienced anything like that this year so it’s important that we put it behind us and move on.

“It is happening week in week out where I’ve got to make too many saves in a game and it has got to change. We have been very good this season, but we have been conceding too many goals and I think a result like that was coming.

“You never like to lose any game because it’s good to keep momentum. There were a few changes to the team on Tuesday but the team that the manager put out was more than capable of getting a result.

“It’s over now so we have to concentrate on the league. We have a massive few weeks coming up so we must learn from the defeat and make sure it doesn’t happen again.”

Fylde have prided themselves on a strong defensive record over recent seasons, but have kept just three cleansheets this term and Taylor pulled no punches in his reasoning.

“I don’t think you can compare records from season to season because the players change and the league changes. But without wanting to sound too harsh, there are people out there that are too concerned about looking good rather than defending properly at times.”

Fylde travel to Gloucester City at the weekend as they switch their attention back to the league programme and former Chelsea stopper Taylor insists it is time for a few of his teammates to ‘stand up and be counted’.

“Gloucester have given us a couple of tough games already this season and those are the kind of games where people now need to stand up and be counted, especially after a result like that on Tuesday.

“People need to show some bottle now. We have got ourselves into a fantastic position this season and we cannot afford to let that slip or become complacent.”