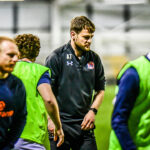 Andy steps up from the role of First-Team Coach and will support manager James Rowe in the dugout for the upcoming season and beyond.

Taylor, a former Blackburn Rovers & Blackpool defender, became an instant hit with Fylde supporters and staff after arriving at Mill Farm from Oldham Athletic in 2019.

However, his Coasters career was brought to a halt after suffering a nasty ACL injury against Notts County in 2020, which led to him later accepting a coaching role at Mill Farm.

Since the arrival of James Rowe, Taylor has been a key figure in the Coasters dugout and moves into the number two role ahead of the 2022/23 campaign.