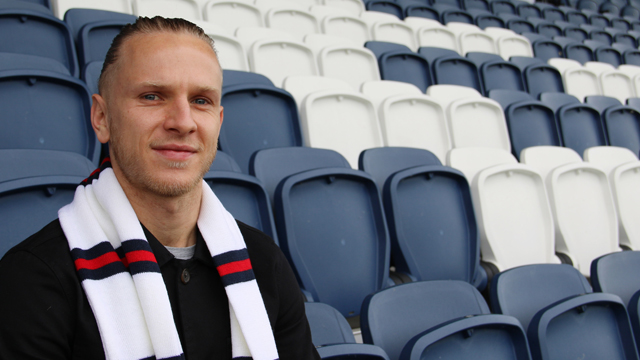 AFC Fylde have bolstered their attacking ranks with their third signing of the summer, with forward Matty Kosylo joining from Halifax Town.

Kosylo, 26, joins the Coasters on a two-year deal from The Shaymen, with the club holding the option of extending the contract an additional year.

A player that Fylde fans will no doubt be familiar with, Kosylo has become a focal part of the Halifax side in the past two seasons, and Dave Challinor is delighted with the acquisition.

“He’s a player who’s attracted a lot of attention at this level, in a team that hasn’t been up the top end – but he’s always been the standout player.”

“Lots of boxes are ticked in terms of scoring goals, creating goals, and running in behind, as well as taking players on.”

“We’re really looking forward to working with him, he can play anywhere across the front or just in behind, and will provide great options and competition for us in those places.” Kosylo netted 24 times in 76 appearances in his three-season spell with The Shaymen, winning promotion to the National League back in 2017 through the playoffs.

“There’s a belief that the club can make that step up to the next level, and that was a big part behind the move,” said Kosylo on his move.

“I’ve always had the desire to push on to the next level, and Fylde have been a club going in the right direction, and were obviously close to going up this season.”

Kosylo’s signing is the first in an attacking berth this window for the Coasters, after Kyle Jameson and Scott Duxbury joined last week.

“I’m known for working hard both going forward and in defence, but I’ve also added goals to my game which is really important,” said Kosylo.

“Fylde have been known for playing good football, and trying to break through the lines – which is obviously great for the attacking players like myself.”

The fans trust in the manager, and he’s got a great plan in place, so it’s important now we all pull together and try to go that one step further than last season and get promoted.”