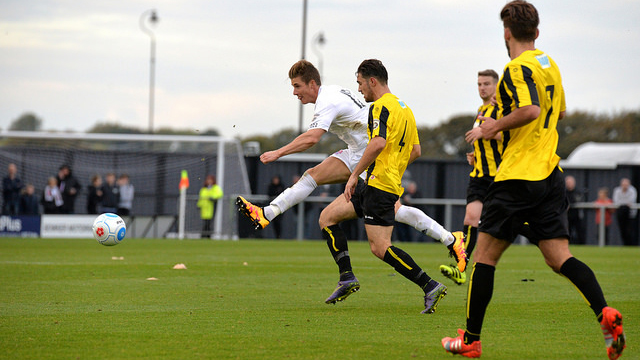 AFC Fylde manager Dave Challinor is revelling in his attacking options after his side were boosted by the return of two key men at the weekend.

Both Brendon Daniels and Dan Bradley featured in the 2-1 victory over Harrogate Town after recovering from injury and Challinor is happy to have such difficult selection decisions to make.

“To have Dan and Brendon back is a massive boost for us and gives us an array of attacking talent.

“You just have to look at the bench on Saturday and the players that missed out to see how strong our squad is at the moment.

“We had the potential to bring on Dan, Brendon and Matt Blinkhorn, so to have that kind of fire power on the bench is great as a manager.

“It gives us some difficult decisions to make, but they are the kind of decisions we want.”

Whilst the Coasters currently lead the pack in the league, Challinor insists there is still ‘more to come’ from his in-form side.

“We have found ourselves behind quite a few times this season so for the lads to show the resolve and ultimately the quality to come out of the other side with a result is very pleasing.

“There are certain things that have been happening on a regular basis this season that we need to cut out and if we can do that then we will be stronger still.

“It is nothing that the opposition are particularly doing, it is usually just problems that we are bringing on ourselves. However, we are still a work in progress and there’s much more to come from us.”