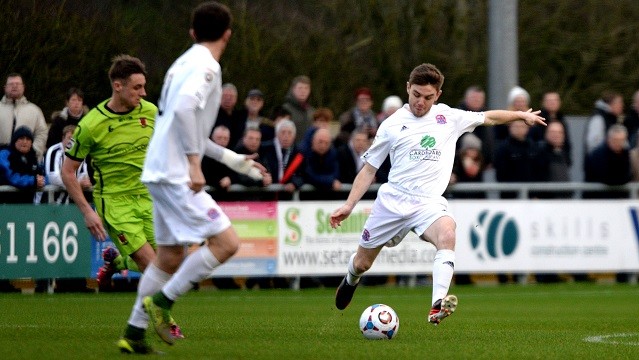 AFC Fylde star Sam Finley admits he is delighted with his current form for the Coasters despite being struck down by illness.

The 23-year-old was named the club’s Player of the Month for December and has played a crucial role in central midfield for the Coasters, who are currently fifth in the Vanarama National League North, just four points behind leaders Solihull Moors.

The former TNS midfielder also won Man of the Match against title rivals Solihull in a month where Fylde won two and lost two in the league as well as drawing 4-4 against Skelmersdale United in the FA Trophy First Round.

Finley revealed that his has been struggling with illness recently so earning recognition for his form was a welcome boost.

“It’s a great award to win considering that I found out recently that I’ve got a condition called ulcerative colitis,” said Finley. “Winning the award has been made a lot sweeter considering the problems I have had and obviously it hasn’t really affected me that much if I’m getting player of the month, so I’m made up.

“I haven’t changed a lot of my game really. Losing weight hasn’t helped because I wasn’t eating that much, but I’m trying to put it back on now.”

The Coasters’ playmaker was also full of praise for his midfield teammates and the role of the supporters in helping him get recognised as December’s star man.

“I have some very good players around me which always helps. We all complement each other and I think it’s a great midfield.

“The fans come week in week out; they pay the money to come and watch you play. It’s a great to receive recognition from the people that watch every game.”

On the pitch, Finley’s personal highlight of last month was helping the team record victories over Hednesford Town and Alfreton Town, which have helped maintain Fylde’s push for promotion.

“We’ve been a bit up and down really – more than we would have liked. We haven’t really been able to get a consistent run of results going. The highlight for me will always be winning games.

“We beat Chorley at the weekend too which was a great result after the disappointment of the Curzon game and, as the manager has said, with the injuries we’ve had. We just need to crack on in the new year and hopefully get promotion.”

Fylde beat Chorley 1-0 on Saturday after a late goal from Danny Rowe secured all three points for the Coasters and Finley said the manager has encouraged his players to put together a consistent run of form.

“It’s crucial that we now carry this on into the new year. Chall said in the changing room after the game that we need to kick on and to use result as a springboard to try and get back up the table.

“Apart from them missing the penalty, I don’t think they really threatened us. I think we dominated the game well and having Richie (Baker) and Tom (Hannigan) back in the side really steadied the ship. It’s always great getting a late winner too!”

Several Fylde fixtures have fallen foul of the weather conditions over the festive period, leaving the club facing a busy couple of months, but Finley insists he is not daunted by the prospect of games coming thick and fast.

“It is frustrating when games pile up and it’s going to be difficult when we are playing Saturday, Tuesday, Saturday, Tuesday. It will be a tough test later on in the season, but we are capable of stepping it up and proving we’re good enough to be champions of this league.”