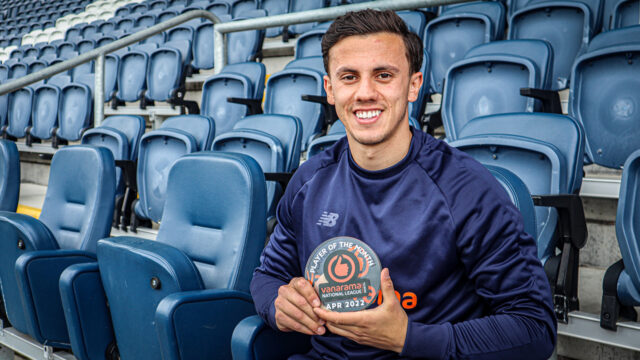 We are delighted to announce that Sam Osborne has been awarded the National League North Player of the Month award for April.

The midfielder picks up the award following a superb month on the pitch, which saw him score three goals and contribute heavily to the Coasters’ good form.

Osborne featured in every fixture throughout April, making six appearances on his return to the side from the injury he picked up in our 3-0 away win at Gateshead FC.

On winning the award, Osborne said: “I’m absolutely delighted to win this award, especially after being voted as Player of the Month by our fans, and it’s been a good period for me after returning from injury.

“The team has been on a great run, and I’ve only contributed a small part to that. We’re feeling good ahead of a big week for us and all focus now is on being successful in the play-offs and hopefully winning promotion back to the National League.”