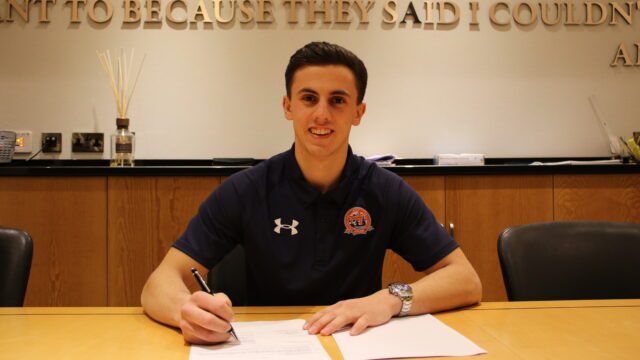 AFC Fylde are delighted to announce the signing of Sam Osborne from Leamington for an undisclosed fee.

The 21-year-old  joins The Coasters on a one-and-a-half-year deal, with an option of a further year in the Club’s favour.

Osborne has caught the eye of many this season, making a terrific start to the 20/21 campaign with nine goals and eight assists for Leamington. He also picked up the National League North Player of the Month award for November as his side went on an impressive unbeaten run.

The exciting winger began his professional career with Notts County, going on to score three goals in 27 appearances at senior level. His exit from Meadow Lane came after rejecting a new contract in order to join the Magpies at the start of the 20/21 season.

Jim Bentley spoke of his delight at acquiring a player of Osborne’s quality. Speaking exclusively to afcfylde.co.uk, the manager said: “We are really pleased to have Sam on board. He’s had an excellent season so far with Leamington, scoring goals and making assists, and I’m sure he will be a good addition to the ranks.

“Sam’s a player who has been attracting interest with his performances and I’m really pleased he’s chosen us.

“Thanks to the chairman, also, for backing us and making this deal happen. We are very much looking forward to working with Sam and hope it’s a successful time ahead for both him and us.

Sam will be available for selection at AFC Telford this afternoon and will wear the number 23 shirt this season.