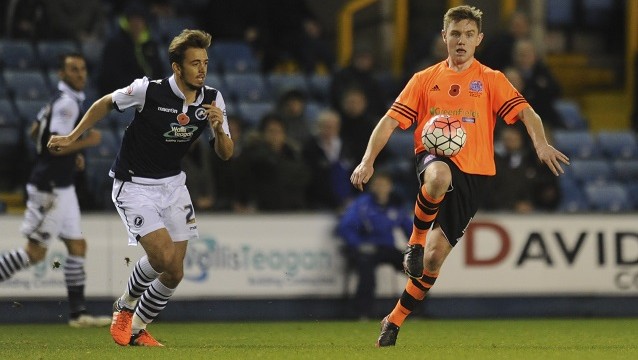 AFC Fylde star Sam Finley has more than one reason for eagerly anticipating the FA Trophy tie with Warrington Town.

The Coasters were drawn alongside the Evo-Stik First Division North side in the third qualifying round and now ex-Warrington man Finley is looking forward to a match-up with his former club in a competition that brought him considerable success last season.

“I signed for Warrington as a 17-year-old and had two good seasons there,” said Finley. “It was a good club and I enjoyed my time there. They didn’t stand in my way when TNS came in for me and offered me full-time football, so I’ll always be grateful to them for that.

“It’s always going to be tough going to their ground. They are up there in the league this season pushing for promotion.

“They have five home games on the bounce leading up to our tie so I think the pitch might be a real leveller. It will be a battle, but if we try and get the ball down as much as possible and play our game then we should be okay. If we have to win ugly then that’s what we will do.

“Cup matches can always go either way but we are confident of getting the right result and it is a competition I am particularly keen to do well in.

“I reached the final of the FA Trophy with Wrexham last season and I see it as an important competition as it presents the chance to go and play at Wembley.

“Coincidently, the manager from the weekend for Brackley Town, Kevin Wilkin, was the boss at Wrexham last term, but he didn’t put me in the squad because I had only just joined. So I missed out on that game and I’d love to get another chance.

“I played in the semi-final victory over Torquay and I travelled down with the team for the final and was involved in the warm-up on the pitch, which was a fantastic experience in itself.”

Finley is delighted to be back in the first team pictured after serving his three-match suspension following his dismissal against AFC Telford last month.

“It was difficult to be out with my suspension, but the lads were fantastic whilst I was missing and won all three games.

“It was a bit disappointing for me personally that the first game I was back available was the Millwall game, but I couldn’t just expect to walk back into the team because the lads had been doing so well.

“However, it was still a great experience to come on and play 20 minutes in a game like that.

“It was good to be back in the starting line up against Brackley at the weekend and I thought I did well so hopefully now I can keep my place.

“We have gone three without a win now, but no one is too concerned, we are all focused on putting that right against North Ferriby this weekend.”