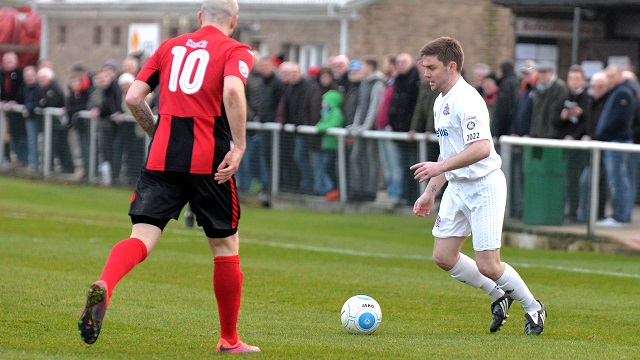 AFC Fylde midfielder Sam Finley continued his comeback from illness in a behind closed doors victory over Chester yesterday.

The 24-year-old, who has missed the last three months with Ulcerative Colitis, made cameo appearances in the Coasters’ last two first-team outings and completed an hour on Monday afternoon in the 3-1 victory over Chester.

And whilst Finley admitted he is eager to win his shirt back, he insists he is more than happy to watch on from the sidelines if recent results continue.

“I’m made up to be back playing. I’ve been back in training for two weeks now and it has been tough. I saw a photo of myself from last week at Brackley where I didn’t look quite in shape and I have been getting a bit of stick over it!

“I have been doing some work myself outside of training too just to try and get those levels back up.

“It’s great to be back. Hopefully the team won’t need me though much until the end of the season if they keep going the way they are.

“If I don’t get back in the side then it means we are doing well so I’ll be happy with that.

“The manager has been great with me since I came back and he has let me take it at my own pace.

“The midfield three have been brilliant since I’ve been out so we will be in no rush to change anything.

“I haven’t really been finding it frustrating being out of the team because we have been winning. The situation as a whole of course has been frustrating, but on the football side, if we are continuing our push for the title, then I have no issue supporting from the sidelines.

“On a personal level, obviously I want to get back in the team, but promotion is far more important than me simply wanting to play.”

The Coasters face two away trips over the next fortnight before returning to Mill Farm for the top of the table clash against title rivals Kidderminster Harriers.

Harrogate Town lie in wait at the weekend before a trip to struggling Gainsborough Trinity and Finley is desperate to take maximum points into the mammoth clash against the third-placed Harriers.

“Harrogate still have a shot at the play-offs so that will be tough. We struggled earlier in the season on the artificial pitch at Tamworth so we will have to adapt better this time around.

“Gainsborough away – that’s the type of game that we just have to go and win. Grind out a win and move on. Six points going into the Kiddy game would be a massive boost.