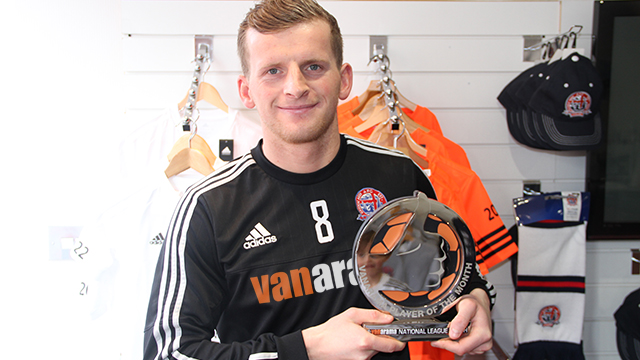 AFC Fylde star Danny Rowe has been named the Vanarama Player of the Month for March.

Rowey was instrumental as the Coasters enjoyed an unbeaten month in the National League North, netting five goals in the process.

His first goal of the month came in the 1-1 draw away at Nuneaton Town, followed up by both goals in a 2-1 home win over Corby Town a week later. A cracker in the 2-1 victory over FC United was topped off with the fourth goal in a resounding 4-0 win over Stockport County on Easter Monday.

The frontman now has 32 goals in all competitions and leads the way in the National League North scoring charts with 20.

“I won this award years ago when I was at Droylsden so it is nice to finally win it again!” said the 27-year-old. “It has been a good month for me but also for the team so I’m delighted.”

“It’s nice on a personal level to be at the top of the goal charts and it was a great achievement to reach 20 in the league against Stockport and to be recognised in this way.

“Now the aim is to keep performing and help the club win promotion come the end of the season.”

Rowey last won a monthly award back in November 2011 when he was named the Blue Square Bet North player of the month after bagging seven goals for Droylsden. The winner of the Blue Square Bet Premier award that month was none other than Fleetwood Town striker Jamie Vardy!