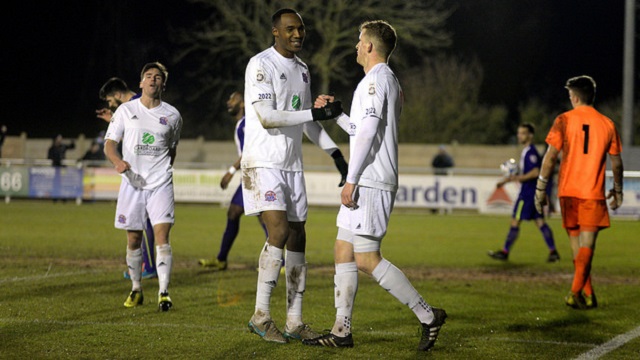 Rowey not finished at 30

After a lean spell in the National League North, the Coasters are back on track with consecutive victories over Boston United and Corby Town over the past week.

Rowe surprisingly failed to find the back of the net in the 5-2 victory over the Pilgrims on Saturday, but was twice on target four days later to see off the league’s basement club.

The 27-year-old’s second goal in the dying embers of the match was his 30th of the season and Rowe insists he hasn’t finished there.

“They were two very good striker’s goals from me!” said Rowe, who recently signed a new deal with the club. “The first was just a tap in and the second was a rebound but I don’t mind how they come.

“I was delighted to have scored my 30th goal of the season and I want to kick on and score as many as possible now.

“I thought we were very comfortable until the last 10-15 minutes against Corby and we looked to have put it out of sight at 2-0. Obviously we conceded late on and they piled on the pressure but I never thought we would come away with anything less than three points.

“We created a lot of chances – Richie (Baker) and myself had a few early on and their keeper made some very good saves but there were some bad misses in there too.

“The goal was coming and thankfully it arrived just before half-time. Unfortunately we weren’t quite as dominant in the second half but it’s another three points at the end of the day so I don’t mind.

“We are back to winning ways now with two victories on the bounce after going through a bit of a bad patch. We want to catch the teams above us but if we can’t do that then we have to make sure we finish in the play-offs.”

Fylde boss Dave Challinor was delighted that the Coasters have rediscovered their goalscoring touch and was full of praise for his prolific frontman.

“I said to Rowey before the game he was due one!” joked Challinor. “The way things were going in the first half, his first goal looked a little more difficult than it was, even though it was an open goal. I just wanted it to hit him and get over the line so he did well.

“He has certainly been our talisman in terms of scoring goals this season and 30 is a wonderful return at this stage.

“It was good on Saturday for a few of the other lads to pitch in with a few goals and if we can continue that, plus have Rowey still scoring for fun, then that’s hopefully a recipe for success.”