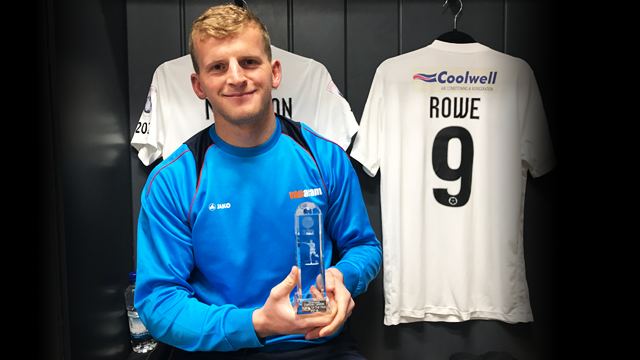 AFC Fylde star Danny Rowe was honoured to be been named the Vanarama National League Player of the Year, as voted for by the Managers across the division.

The Coasters hitman has taken the step up to the fifth tier of English football in his stride, plundering an impressive 24 goals as Fylde secured a play-off place over the weekend.

Rowe picked up the gong for the league’s best player last season when his 50 goals helped Fylde to National League North title glory.

The frontman etched his name into Fylde folklore when his strike in a 2-0 win at Hartlepool United earlier this season surpassed Richie Allen’s club record 119 goals.

The 29-year-old, who is now just two goals short of 150 for the club, said: “I wasn’t expecting it to be honest but I hadn’t really given it much thought.

“All my concentration was going on getting into the play-offs and it hadn’t really crossed my mind.

“That said, I was obviously delighted to get the award. I would have hoped to be in contention but there are a lot of good players in this league.

“It has come from people who know a lot about the game and the league, so it means a lot that they have recognised my contribution.

“For them to think I am the best player in the league is a huge honour.

“I think my own personal season and the club’s season have been very similar. On both counts I think we could have done slightly better at first because we had a slow start.

“I didn’t score many at the very start of the season and as a team it took a little while to get going.

“Overall, I think I have done well this year and to pick up the top award means I must be doing something right!

“To score 24 league goals and reach the play-off, obviously we will take that, so overall it has been a very good season.”