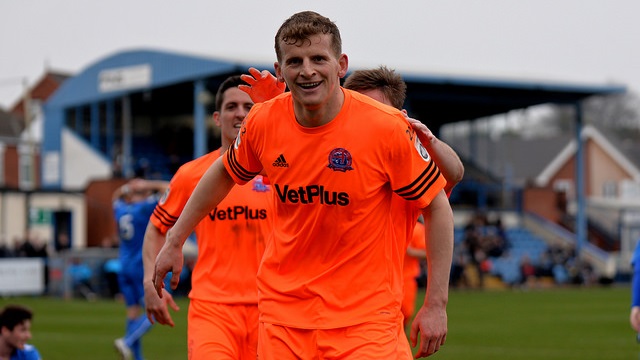 AFC Fylde marksman Danny Rowe admits he has one eye on breaking records this season after enjoying a phenomenal campaign in front of goal.

The 28-year-old forward opened the scoring in Fylde’s 2-1 victory at Gainsborough Trinity at the weekend, taking his goal tally in the National League North to 40.

Altrincham’s Damien Reeves holds the current league record with 43 goals whilst Rowe is also closing in on the Coasters’ all-time record held by Ritchie Allen – a point that hasn’t gone unnoticed by the frontman.

Rowe said: “I have to admit, it has been on my mind! I have scored a lot of goals this season despite having a little blip around Christmas and now the goals have started to flow again.

“First and foremost I want my goals to help us win the league but I also want to break records on a personal level.

“I will just carry on what I’m doing and hopefully I can get there.”

The Coasters maintained their 11 point league at the top of the table following the hard-fought victory over struggling Gainsborough and Rowe was delighted to leave with three points.

“It’s the kind of place you come and grind out a result and that’s what we have done over the years.

“They don’t have the best pitch or the best facilities, so we were happy to just get through it and leave with all the points.

It probably wasn’t my best game of the season but I thought I did well and I got another goal so I’m obviously pleased with that.”

Rowe and his teammates face a season-defining double header against promotion-hopefuls Kidderminster Harriers and Stockport County over the next seven days and Rowe is desperate to claim maximum points.

“We have two huge games coming up in the next week and they could both go either way but we have to make home advantage count. We have a good pitch, which may suit Kidderminster too because they are a decent footballing side.

The game there earlier in the season was very open and entertaining and I’m sure it will be close again.

We will work hard this week and look forward to the weekend. There’s no doubt that we are aiming to win the game and then we can move on to Tuesday and the quick turnaround for Stockport. We all want to win that one too.”

Rowe was also delighted to see midfielder Sam Finley return to the starting line-up on Saturday: “Sam is massive for us. He keeps us ticking in the midfield and creates chances too. There aren’t many midfielders around at this level who have both sides to their game like Sam has.

“He has been a big miss over the last few months so hopefully he can stay fit between now and the end of the season.”