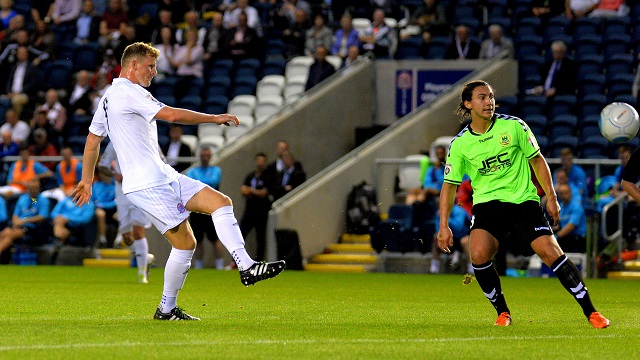 AFC Fylde striker Danny Rowe admits he is enjoying the season of his life.

The Coasters hitman has already netted an incredible 14 goals in the first nine games – double the tally of anyone other player in the National League North.

Rowe, who hit his third hat-trick of a sensational season in Tuesday night’s 4-1 victory over Curzon Ashton, even has a higher goals total than nine clubs in the division!

The frontman is well on course to topple last season’s haul of 24 league strikes and hopes his purple patch in front of goal continues.

Rowe said: “I have never started a season this well. My goal record has always been decent since I arrived here but nothing like this.

“It is usually towards the end of season that I have started adding a few more goals whereas this year I have started really well right from the off and I just want to carry that on.”

Impressively not one of the 27 year old’s goals has been from the penalty spot, however Rowe has a full inventory of different strikes in his armoury.

“I think it has to do with the fact that throughout my career and growing up as a young footballer I used to play a few different positions,” explained Rowe. “I used to play in midfield and sometimes from the left so I’m comfortable picking the ball up in deeper areas rather than just waiting for chances to happen like a normal striker.

“That said if I can get tap ins too then I am more than happy.”

The victory over Curzon, coupled with Salford City dropping points against 10-man Halifax Town, saw the Coasters climb back to the top of the league table, a position Rowe is keen to maintain.

“Even though we have had some frustrating results, as the manager has said to us on more than one occasion, if you’d have offered us the points total and position we are in at this stage at the beginning of the season then we would have definitely taken it.

“We got ourselves a bit down when we dropped points against Gloucester at the weekend but when you look at it realistically we have won other games that maybe we would have taken a draw from so it evens itself out.

“Most people probably expected us to have maybe drawn with Halifax and beaten Gloucester so however we get the points doesn’t really matter.

“On the balance of things we are happy and we have gone back to the top of the league and that’s exactly where we want to be.”