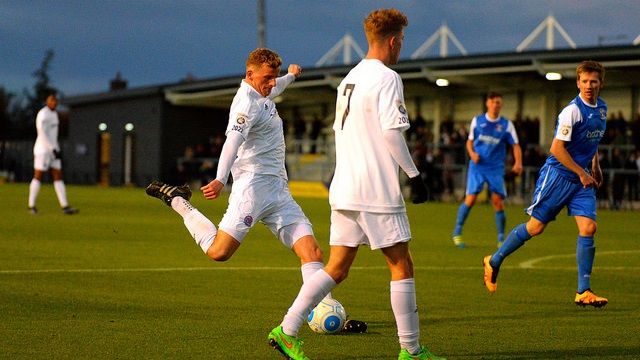 AFC Fylde star Danny Rowe was delighted to end his mini ‘goal drought’ in the 5-0 thrashing of Stalybridge Celtic at the weekend.

Rowe had failed to register for two games, but was back with a bang on Saturday netting a perfect hat-trick as the Coasters extended their lead at the top of the National League North to four points.

The frontman is now just one goal shy of last year’s total of 24 with well over half the season left to play, but was more pleased that his side bounced back in style after suffering their first defeat of the season.

“I hadn’t scored in two games and the lads were joking that I was having a goal drought so it was great to get back on the scoresheet.

“It was even more pleasing to get back to winning ways after last week’s disappointment. It wasn’t the most difficult game we have played this season, but regardless of that we had to perform and to win so convincingly was great.

“I never imagined that I would start the season so well. It’s been my best ever start. You do set targets at the beginning of the season that you keep quiet, but they are for the end of the season so there is still plenty of time to go.

“I did think that if I could get a consistent run of games this year then I would score goals.

“It was good to get a variety of goals too – left foot, right foot, header. The most pleasing one was probably the header because I don’t score many of those. I like to think I am decent at finishing with both feet but I want to start adding more headers so that was pleasing.

“We want to keep this momentum going now. Darwen are a couple of leagues below us and I’m not sure what kind of team the manager will put out, but I imagine there will be one eye on Saturday’s game at Darlington.

“A few different players might get a run out, but our main focus will undoubtedly be the weekend.”