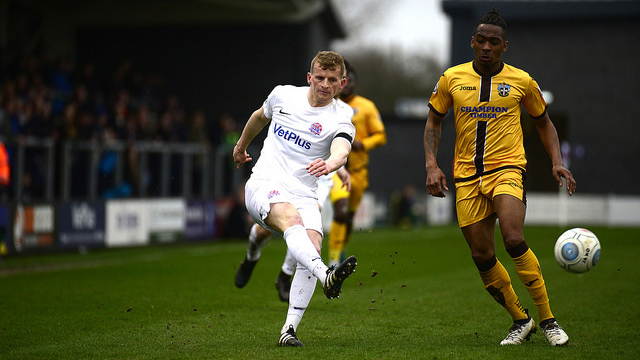 Coasters boss Dave Challinor admits he has to be careful with match-winner Danny Rowe after his 24th league goal of the season completed a sensational comeback victory over high-flying Sutton United.

Rowe slotted home ten minutes from time to seal a 2-1 victory and whilst Challinor admitted it wasn’t the frontman’s best game, he insists the 29-year-old is pivotal to Fylde’s promotion charge.

The National League’s top scorer has started 46 of Fylde’s 47 games in all competitions this season.

Challinor added: “I told Rowey that I thought he wasn’t at his usual standards, but in fairness he has played every single game this season and that is some feat.

“He has played more football than anybody else at the club this term and he is massively important to us, but we need him to keep going because we have some huge games coming up.

“His goal on Saturday took him to 30 in all competitions, which is a great effort. We have to look after him and make sure he’s right and ready to go.

“He could yet get to 30 goals in the league. It would be a big ask but one that he is more than capable of achieving.”