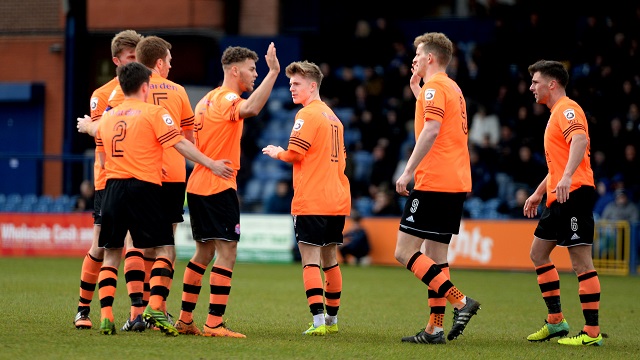 AFC Fylde star Danny Rowe continues to lead the way in the National League North goal charts after bagging his 32nd goal of the season in the 4-0 drubbing of Stockport County on Easter Monday.

Rowe provided the icing on the cake with the fourth goal of the afternoon when he beat his man on the edge of the area before firing a left-footed strike into the bottom corner.

The Coasters hitman now has 20 league goals to his name, one ahead of Boston United’s Dayle Southwell, and was delighted with his side’s performance at Edgeley Park.

Rowe said: “Right through the team it was one of the best performances of the season. To be honest we battered them all game and they never really got a look in.

“Obviously they had played on Saturday and we had our game called off after just half an hour so that will have played some part, but we were simply the better side on the day.

“I got myself a goal but I probably could have scored more to be fair. It could have been a lot worse for them than four-nil when you look back at the chances we created”.

Rowe scored the opener from the penalty spot on Saturday against Bradford before the match was ended by the referee due to torrential rain.

Whilst the 26-year-old was frustrated at losing his goal, he admits he has a second chance to find the bag of the net when the two sides meet in the rearranged fixture.

“It was frustrating for me personally to have my goal chalked off because of the abandonment, but it means we have another game against them now and I’ll want to score in that one too to make up for it.

“It’s nice on a personal level to be at the top of the goal charts and it was a great achievement to reach 20 in the league. It was good to grab one against Stockport to keep myself up there in the running for top goalscorer.”

Dave Challinor’s troops extended their unbeaten run to six earlier in the week and are now ten points clear of Nuneaton Town who sit just outside the play-offs.

Next up for the Coasters is a tricky trip to 19th placed Brackley Town who are fighting for league survival, however Rowe insists Fylde’s current form has filled the team with confidence.

“Brackley were a good side when we played them earlier in the season and we struggled a little bit in that one. However, we go into the match full of confidence following Monday’s result and performance.

“They are battling against relegation so it won’t be straight forward but if we play anything like we did against Stockport then they are going to struggle.

“We have to go there to win and hopefully the goals will continue to come for me, but the main thing is that we get the result and continue this run of form until the end of the season.”