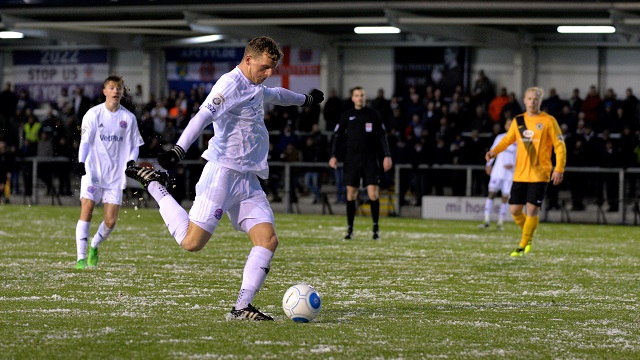 The Coasters star has hit 28 goals in the National League North this season, including four in Fylde’s record-breaking 9-2 victory over Boston United last weekend, and has already well surpassed his tally from last year.

Rowe’s scoring exploits have inevitably stirred interest from the higher reaches of the football pyramid but the 27-year-old hopes to achieve his ambitions here with his local side.

“Fylde are the closest club to my house and you get to know a lot of the people around the place. A lot of my friends and family come to games so I’m very happy here.

“I’m not really sure what the future holds. I have ambitions with the club and on a personal level and truthfully I do want to play in the Football League. Whether it happens here at Fylde or elsewhere, I’m not really thinking about yet, I’m just concentrating on doing well here.

“I’d like to think I could play and score goals at a higher level, but that also goes for quite a few players in this squad. I have scored goals throughout my career, but never anything like this season, so it obviously suits me here.”

Rowe plundered home a four-goal haul for the second time this season a week ago and insists that he never takes his foot of the gas in pursuit of more goals.

“It was great to score four again. Nothing would drop to me in the first twenty minutes or so, but I got my first, which was a tap in, then everything started falling for me.

“I would usually say my fourth goal, which went in the top corner, was the pick of the bunch but I don’t get many with my head so that was probably the most pleasing one.

“If you sit back and settle for what you have then it can go both ways. If you take your foot off the gas then you can let the opposition back into the game so we always try to kick on.

“The manager doesn’t let us ease off. I personally don’t let up because I want to score as many as I possibly can.

“Teams do try different things to try and limit you, but I am starting to get used to that now. They do double up sometimes, but if they do that then it leaves other people free so it works both ways.

“There are plenty of goals throughout the team so if they are tight to me then we have other players that will punish them.”

Rowe registered 31 goals in his first season with the club and 24 last term and admits he is well on course to smash any targets for this campaign.

“I set targets and most people would be happy with getting 20 for I always aim to get 30. I’d like to think I would get quite a way past that now! I don’t want to say exactly how many I’m aiming for, I just want to continue doing well.”