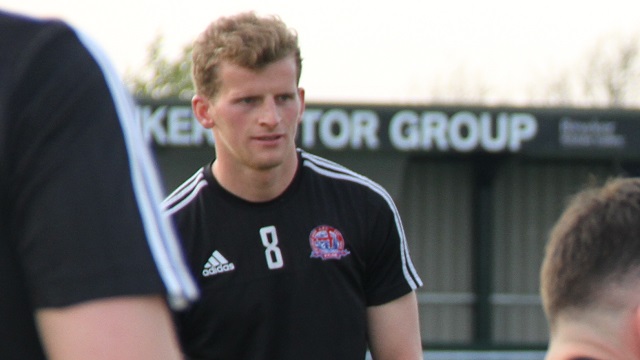 AFC Fylde kick-off their pre-season schedule this weekend and whilst striker Danny Rowe admits he anything but looking forward to the countless hours running along Lytham front, last season’s top scorer knows it is a vital part of the preparation.

“Like anyone it’s not a part of the season that I particularly enjoy, but I know I just have to get back now, work hard and get myself fit.

“To be honest I don’t do much fitness work through the summer, I tend to find having a rest during off-season suits me better personally.

“It’s when pre-season starts that you really get back into it rather than spending the summer doing exercise.

“I don’t think any player enjoys the first few days of running but it’s not my first time so you just know you have to do it. It’s hard work initially and can be a bit boring but there’s no point grumbling about it, it’s just part and parcel of what we have to do as footballers.

“It starts to become more enjoyable after a week or so when the balls start to come out and we start playing games.”

There has been a major reshuffle of the Coasters squad following the summer transition to full-time football and now Rowe can’t wait to meet his new teammates.

“It gives us a chance to meet the new lads and start to gel as a team again. It gives us time to get to know each other on and off the pitch which is important. We can learn each other game, especially when it comes to the new signings.

“I already know Willo (Steve Wiliams) from playing with and against him and he’s a very a good defender. He is the kind of player you need in this league – big and strong.

“Admittedly I don’t know too much about Andy Bond, although I know he has come from Crawley so he is used to playing at a higher level which can only benefit us.

“But I think the pick of the bunch is probably Brendon Daniels. He is a very good signing in my eyes. I was hoping we were going to sign him halfway through last season, but unfortunately it didn’t come off for whatever reason.

“A lot of what we worked on ahead of the play-off games against Harrogate last season was how to stop him and I’m delighted he has come on board.

“His delivery from wide positions is brilliant and he has a great left-foot. He caused us a lot of problems last season so I’m glad he’s on our side now and we don’t have to face him again.”

Rowe enjoyed a fine campaign bagging 24 league goals as the Coasters reached the Play-Off final, before ultimately missing out on promotion in extra time against North Ferriby United and the frontman believes he can produce more of the same.

“I scored quite a lot of goals last year and if I finished with a similar tally next season then I’d be happy but I would obviously like to better that if I can.

“I had a spell early on in the season when I didn’t play much so if I can get off to a better start then I’d like to think I would better it.

“It could be a tighter league next season with better defences so we will wait and see. I always aim to score 20-plus in the league and anything over that is a bonus.”

Whilst the National League North looks set to be the toughest for many years, Rowe still believes that Fylde are the team to beat.

“Last season I thought we were the team to beat – although Solihull surprised everyone – and I think it will be the same again this year.

“There are definitely some stronger teams in the league this year, but personally I think Halifax, Harrogate and ourselves will be the three to watch.”