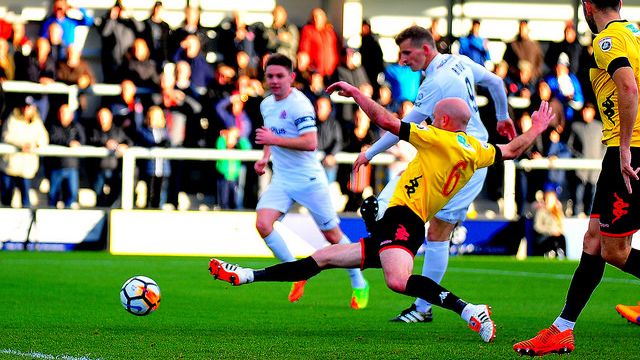 AFC Fylde frontman Danny Rowe insists that his side haven’t finished yet after reaching the FA Cup second round for the first time.

Rowe took his goal tally to nine for the season with another double against Kidderminster Harriers in the last round and is hungry for more success in the competition.

“It’s huge for the club to get this far but we want to go further still,” said Rowe. “I’m of the same opinion as I was for the last draw – I’d prefer the easiest possible way through to the next round. I’d much rather get a low ranked team at home than a big draw away.

“Even if we got to the third round stage, I’d still rather get a winnable game than a big draw. I just want to get as far as possible.”

Rowe’s goals at the weekend put the Coasters on their way to some club history and the Fylde favourite believes his side have taken huge strides since last season.

“I think we were comfortable,” added Rowe. “We got one before the break but then got ourselves well in front before they pulled a couple back.

“We probably deserved to win by more but we dropped off towards the end.

“In possession Kidderminster are a good team – probably one of the best on the ball that we have played all season – and both sides had chances but it was never in doubt for me.

“They were our main rivals last season and there wasn’t much between us, so this shows how far we have come.”