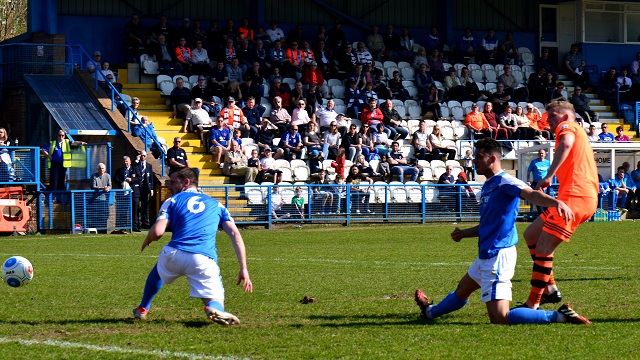 AFC Fylde striker Danny Rowe is just one goal from breaking the league record following his strike in the 2-1 defeat at Stalybridge Celtic at the weekend.

The record was held by Altrincham’s Damien Reeves after his 43-goal haul back in 2011-12 however Rowe’s equaliser at Bower Fold on Saturday brought him level with four games to play.

Rowe’s strike was also the Coasters’ 100th league goal of the season and despite admitting he was pleased to net the landmark strike, the prolific frontman felt the defeat tainted his achievement.

Rowe said: “From a personal point of view, it wasn’t my best game even though I’ve equalled the league record. We’ve come away losing the game so it’s not really a good day.

“Obviously I’m pleased and as I said in an interview a while back, my aim was to finish breaking the scoring record for the league this season and to get promoted.

“That is still the same and it’s important that from both a personal point of view and a team perspective that we keep going.

“We knew before the game that the pitch wasn’t going to be great and it was probably worse than we thought it would be to be honest.

“It changes the game but I thought we played well in the first half. We got in behind and created chances and we had two, maybe three one-on-ones before half time.

The Coasters’ lead at the top of the National League North has been cut to six points and Second-placed Kidderminster Harriers have the opportunity to make up further ground on the leaders in their game in hand on Tuesday evening.

However, Rowe insists that he wouldn’t swap places with any of the chasing pack for the crucial run in.

“We’re in the best position in the league and we wouldn’t change that. We are there to be shot at and the only way that we won’t win the league now is if we throw it away.”

“We’re still number one in the league and we are the best team in the league. We’ll get back together and we’ll go again on Friday. We’ll put this game to bed and forget it. We’ll look forward to Halifax and try to get the game won.”