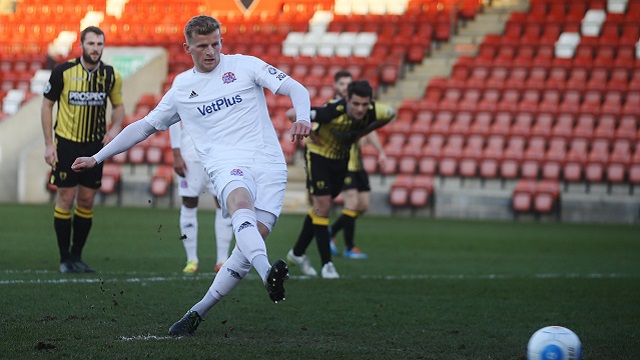 AFC Fylde star Danny Rowe goes in search of his one hundredth goal for the club this weekend after hitting 99 in just two and a half seasons with the Coasters.

The 27-year-old frontman has enjoyed a phenomenal campaign, firing 31 goals already, including his sixth hat-trick of the season as Fylde secured their place in the first round of the FA Trophy at the expense of Gloucester City at the weekend.

Despite his treble, Rowe wasn’t impressed with the display of his side, but admits winning is a good habit regardless of the performance.

“I scored the three goals but overall, the performance wasn’t great. We’ve probably ended up nicking a win. This competition probably isn’t the best thing for us at the moment but obviously, a win’s a win. It’s good to score but the overall performance was poor.

“You just try and win the game. When I scored the second, that would’ve taken us to a replay but then we just tried to win the game to avoid that and obviously, we did late on.

The Coasters make the long trip back to Whaddon Road later this month and Rowe is hoping for an improved performance and a similar result.

“We’ll be aiming to get another win when we go back there in a couple of weeks. We have an idea of what we’ll face in the league now but so do they.

“We’ve played them before at home earlier in the season and drew but we’ll come back in two weeks’ time to win the game. We made a few changes to the team but I think some players might come back into the side. We hope to put on a better performance, that’s for sure.”

“We got beat in the FA Cup 2nd Qualifying Round which isn’t good, so it was nice to progress in the FA Trophy, but our main aim is the league.

“Overall, if we get promoted we’re not overly bothered about other competitions. However, in any competition, you want to go as far as you can so you just keep trying to win games and see where you go.”