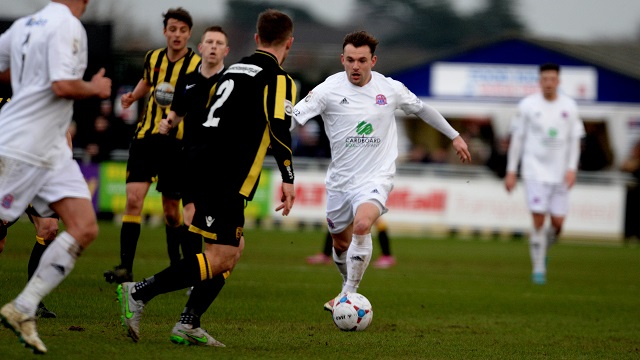 ‘The right time to leave’ – Lloyd

Danny Lloyd insists it was the ‘right time’ him to part ways with the Coasters.

Lloyd, who joined Stockport County yesterday, enjoyed three successful years with AFC Fylde, but had grown increasing frustrated with a lack of match action over the last 12 months.

The winger, who joined from Tamworth ahead of the 2013-14 season, admits he leaves with a heavy heart, but is already looking forward to a new chapter in his career.

“The only reason really is a lack of playing time to be honest,” said Lloyd. “It’s been a frustrating year for me because my time on the pitch has been limited.

“I think I have contributed to the squad in a decent way in terms of goals, but I understand the management pick the team and there are no hard feelings whatsoever. I have to respect their decision and I have done that, I’ve always been professional in my approach when I’ve not been playing.

“I spoke to the manager earlier in the week and just said that I think our professional and working relationship has gone as far as it can do. We have had a great three years together but it’s time for a new challenge.”

The winger leaves the club fifth in the all-time goal charts with 51 strikes and has fond memories of his time in a white shirt.

“I’ve enjoyed my time with the club immensely,” added Lloyd. “I can’t thank the chairman, the lads and the fans enough for how they have made me feel welcome. I’ve always had a good relationship with the fans and all the lads that have been and gone have been brilliant.

“I’ve won a few medals, won promotion, scored some nice goals and won a couple of cups so on the whole it’s been a very enjoyable time.

“The play-off final and the way we went up in my first season was fantastic. We did the treble that season and I was joint top scorer which was brilliant personally.

“There have been so many high points. Scoring the winner in the 88th minute against Bradford Park Avenue last season was one of my most important goals for the club and coming from behind to beat Harrogate Town 4-1 in a must win game was also memorable.

“Going up this season would have been a lovely way to leave the club, personally and for the club, to send them on the way to where they deserve to be.

“I respect the club massively for what they are trying to do in terms of putting Fylde on the map. I have a lot of time for that, but I just feel that I haven’t been an integral part of the plans this season.

“People might argue that I’ve made a lot of appearances, but a lot of those have been from the bench at the end of games. During my time I’ve probably made as many sub appearances as I have starts and I can’t continue like that.

“Even if we had gone up then I still think my decision would have been the same. We would have probably gone full-time and that would have counted me out straight away anyway because of my job.

“I know how football works though and I really do wish the club all the very best but I want to be a focal point in a team and that’s what I’m going to go and do.”

Lloyd joined fellow National League North side Stockport and hopes to be lining up against Fylde in the not too distant future.

“I’m used to challenging for promotions and titles so I needed to go somewhere with similar ambitions. Hopefully I’ll be right up there playing against Fylde next year!

“I’ll always have a soft spot for the club and I hope they do well again next year. It’s a club that I care about and one that I want to see succeed.

“Mill Farm is going to be a really exciting venue and I can’t wait to come back and play there in the near future.

“After missing out on promotion so cruelly this season, the club just need to dust themselves down and rebuild for next year and I’m sure they will do that.”