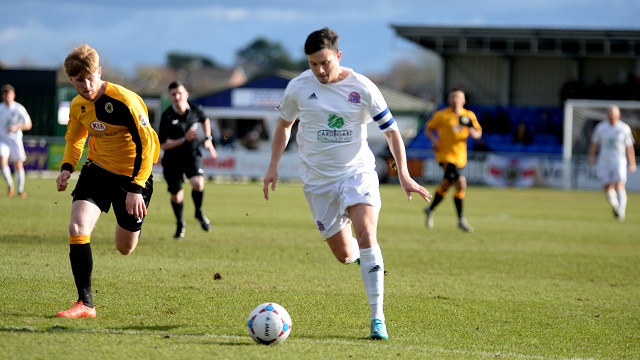 AFC Fylde star Richie Baker is delighted to be back amongst the goals ahead of this evening’s clash with Corby Town – a side he has enjoyed much success against this season.

Baker kicked off the season in a rich vein of goalscoring form and netted both goals in a 2-1 victory over Corby Town earlier in the campaign as the Coasters rose to the top of the National League North.

However, despite bagging six goals by mid-October, the midfielder has found himself playing a deeper role in the team with less goalscoring opportunities.

The goal drought ended against Boston United at the weekend when Baker finished off a sensational Coasters move and now he is keen to add to his tally as his side prepare to go up against relegation-threatened Corby tonight.

“At Corby was the last time I had scored before the weekend!” said Baker. “I’m just glad to be playing a bit further forward for a change. One assist and one goal for me against Boston so I was very happy.

“I thought everyone did well and it all just kind of clicked. Over the last few weeks that final cross or that final pass hasn’t quite been there and we have been a bit of a ‘nearly’ team.

“Every mistake we have made recently has been leading to a goal. We couldn’t have done much about the free-kick against us because it was unbelievable, but perhaps we could have dealt with the second goal a little better. James (Hardy) could have cleared the ball down the line instead of trying to dribble it out, but he’s only young and we would never try and take that flair out of him.

“He brings something to the attack, something completely different to any other forward. He’s a very clever player, he drifts into pockets and if you saw him in training, that’s just a normal performance for him.

Baker was also full of praise for another new man in the team Bohan Dixon.

“Bohan has been great since joining and has settled in very well. We are a very accommodating changing room and we are delighted to have him here. He is another who has added something different that we didn’t have before – pace, power, height! He tells me he can’t head the ball though!

“He is a powerful runner and that takes a lot of pressure off us when he breaks forward with the ball.”

Fylde climbed back up into fourth in the table with victory at the weekend but Baker believes his side have found it difficult at times this season.

“Fingers crossed we have got our bad patch out of the way now. We haven’t been consistent enough this season. Last season we were beating teams left, right and centre and we haven’t quite got to that level yet this time around.

“Teams used to fear us, especially at home, but we have found it harder to break teams down now that they have figured us out.

“There are still a few games to go and hopefully we can now put a run together. We want to be in the play-offs and if we can go in to them with a run of form behind us then we have every chance.”