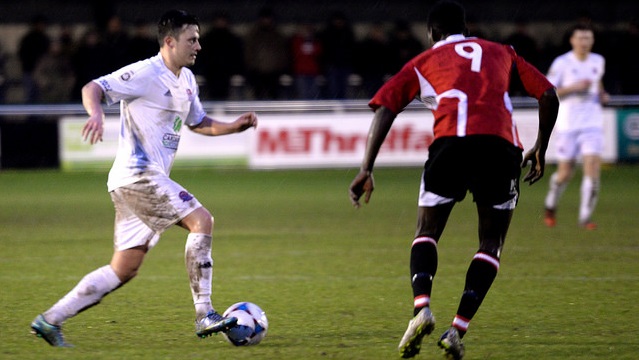 AFC Fylde star Richie Baker is hoping to get back amongst the goals this evening against a side he has enjoyed much success against this season.

Baker kicked off the season in a rich vein of goalscoring form and netted both goals in a 2-1 victory over Corby Town earlier in the season as the Coasters rose to the top of the National League North.

However, despite bagging six goals by mid-October, the midfielder has found himself playing a deeper role in the team with less goalscoring opportunities.

Now Baker is keen to add to his tally as his side prepare to go up against relegation-threatened Corby.

“At Corby was the last time I scored!” said Baker. “Since then I seemed to have dropped further and further back in the team and I don’t really get chance to shoot as much anymore.

“Hopefully I can get back to that because goals have always been a big part of my game. Ever since I started playing I’ve wanted to score goals.

“Chally has found me a new role in the team now where he wants me to sit and protect the back four at bit more. I do like scoring goals but I’m happy to do what he needs and I find it just as rewarding making a goal as scoring one. As long as we get three points I don’t really mind who scores to be perfectly honest.

The Coasters missed a glorious opportunity to close the gap on the teams above them in the league at the weekend as they slipped to a 3-2 defeat against Worcester City.

Table toppers Solihull Moors suffered a humiliating 6-0 reverse at Harrogate Town, but Baker believes the Coasters were not helped by some bizarre refereeing decisions in their match.

“I thought we did enough to win the game at the weekend,” added Baker. “We just conceded some really sloppy goals.

“I thought we created a lot of chances, but ultimately we shot ourselves in the foot and made it very difficult for ourselves. Two-nil down with ten men is obviously not ideal and very tough to come back from, but everyone involved did their very best to get something from the game.

“To get back on to level terms and then concede so late was a bit of a kick in the teeth. We looked like we were the only team that was going to go and get that winner, but now we have to pick ourselves up for tonight and we will go again to try and win.

“I didn’t really see what happened with Josh. I hate blaming referees for anything, but I don’t think any of the officials had a particularly good game. Maybe I don’t know the rules as well as the referee, but I don’t know how you can give a penalty for an off-the-ball incident when the ball is 40 yards away. I can understand the red card, but how on earth is it a penalty, maybe I’m wrong.

“On top of that I believe Dion’s goal early on was actually onside, so I don’t think we got what we deserved by any stretch.

“I thought the lads did well considering, but that doesn’t really matter because we came away from the match with zero points and didn’t close the gap on the top of the league where we want to be.

“It’s important we don’t let that affect us too much as there is still a long way to go and plenty to play for.”