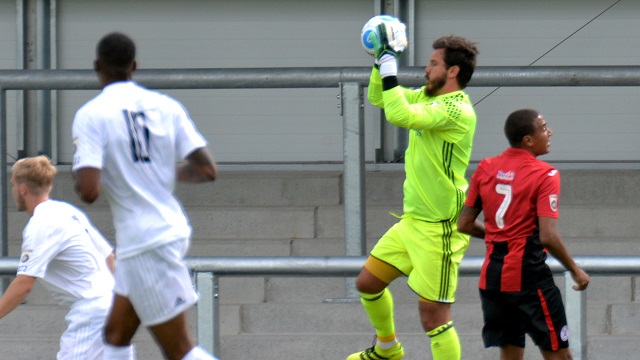 AFC Fylde goalkeeper Rhys Taylor is keen to win back his place in Dave Challinor’s first team plans for the trip to Kidderminster Harrier this afternoon after recovering from injury.

The former Chelsea stopper joined the Coasters in the summer but limped out of just his fourth game for the club.

Fellow summer signing Tony Thompson has impressed during his spell between the sticks and Taylor is relishing the competition.

“I’m really looking forward to being back involved. It’s been a long two months out but from what the scan originally said, it could’ve been a lot worse. I’m ahead of schedule and I’m ready to go.

“It was tough to take obviously with it coming so early in the season, but I’d rather get it out the way now and be fit for the rest of the campaign.

“Tony has done well when I’ve watched him and playing in a good team helps. Hopefully we can tighten up at the back and keep a few more clean sheets. I think that’s in the manager’s mind as well.

“Obviously I’ve come down from three levels higher so I think I’d be expecting to go straight back in but Tony’s done well when he’s played and full credit to him. We will have to wait and see.”

Taylor admits sitting on the sidelines has been difficult but is delighted to be back in the fold.

“To be honest, I’ve not missed a game for three years and then all of a sudden you’re out for two months. It’s all to do with luck really, you can’t control it.

“I’ve been looking forward to getting back in as soon as I felt that I could and that has helped. I’ve been in full training for the last two weeks now.

“I also didn’t get a full pre-season because I joined quite late so it’s been quite good for me to get a couple of weeks of hard work in so I’m fully fit.

“The lads have done really well to be fair and to be unbeaten is some achievement. There aren’t many teams in the whole of England that are unbeaten. Hopefully we can keep that going but the main aim is promotion.”

Manager Challinor could potentially have a full squad to select from for the first time this season following return of Taylor and the recovering Brendon Daniels and the goalkeeper believes it will give the squad an added boost.

“Obviously Brendon and myself signed in the summer and to be without two players that you’ve just signed is a big blow.

“However, the squad is strong and I think that has been proven with the results that we’ve got even when we’ve been missing a few players. Full credit to everyone.”