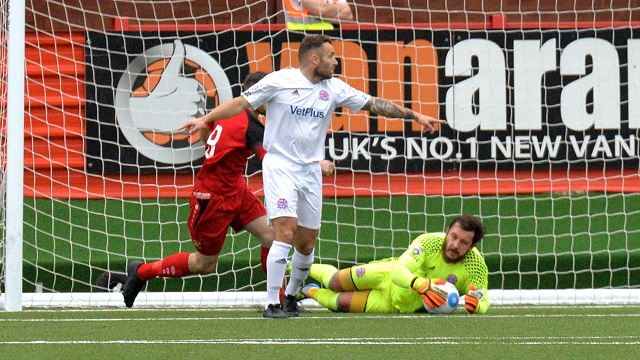 Rhys hoping to bounce back

AFC Fylde stopper Rhys Taylor insists his side are not too disheartened after suffering their first National League North defeat of the season at the weekend.

The Coasters went down to a single goal away at Tamworth on Saturday to halt their phenomenal 15-match unbeaten start to the campaign.

Fylde remain a point clear at the top of the table despite the defeat and Taylor was philosophical about the result.

“It’s a tough place to come on this artificial surface. I don’t think many teams will come here and win, because it’s an advantage to the home team. We were always going to lose one. We had to get it out the way and now we just have to start another streak now.

“It’s the end of a run, but we see it as the chance to start another one. No-one’s too downbeat. It’s happened and there’s nothing we can do about it, we just have to crack on now.”

Tamworth installed an artificial 3G pitch over the summer and Taylor admits he is not a huge fan.

“I don’t think this surface should be allowed personally. Like I said, it’s such an advantage. That’s why it’s not going to be in the league because it is an advantage. Obviously, for clubs it is a financial boost and sometimes you’ve just got to deal with it.”

The 1-0 defeat at the Lamb Ground was the first time Fylde have failed to score in a league game this season but Taylor is more concerned at performances at the other end of the field.

Fylde are the top scorers in the league this term with 44 goals but have kept just two clean sheets to date and Taylor believes the Coasters need to tighten up at the back.

“I think I did alright personally but that’s what I’m there for. When I’ve got make saves, I’ve got to make saves. We just need to tighten up especially at set-pieces. It’s disappointing to keep conceding goals like that.

“It’s not great to still be looking for a clean sheet after so long. My second game I think was our last clean sheet. We just need to stop making sloppy mistakes especially from set-pieces – games are decided on that sometimes.

“You can’t be babysitting the other ten men. They’ve got to do their own jobs. Obviously people are still adapting to it and I’m sure we’ll get there.

“We’ve got to win against Stalybridge at the weekend now and get ourselves back on track ahead of the huge trip to Darlington the following Saturday.”