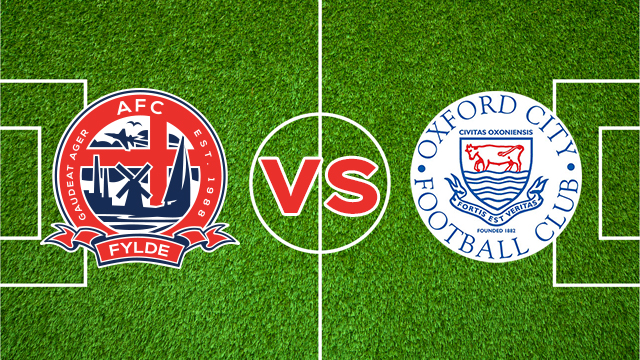 AFC Fylde capped off Non-League Day with a second successive away win thanks to another commanding display of finishing which saw The Coasters end on the right side of an incredible 8-1 scoreline.

Oxford City were the victims this time as Richie Allen began the rout in the 13th minute before adding his second three minutes later. The home side pulled one back on 25 minutes through Daren Pond but the two goal deficit was restored by an own goal five minutes later.

Oxford reformed and moved to three at the back making a substitution on 36 minutes and from that point Fylde took full control adding a fourth through Danny Rowe, a fifth from Liam Tomsett and a sixth from Mike Barnes – all before half time.

The goal rush didn’t quite carry on into the second half but Fylde still managed another two through Rowe and Barnes to seal an unbelievable victory.

The build-up to the game was increased tenfold before kick off when Fylde appeared on Sky Sports News as a feature news story and they certainly lived up to their billing against an City side that had no answer to the Conference North new boys.

However it was the home side who struck the first shot on goal inside three minutes when Adi Yussuf shot wide from a tight angle before Michael Potts fired Fylde’s first attempt over the bar.

But on 13 minutes Allen recovered well after initially losing the ball one-on-one, only win it back off his marker, ignore the shouts of Rowe to his right, cut inside, round keeper Mark Scott and shoot into an empty net.

And it was 2-0 three minutes later when he struck again, this time beating the offside trap latch onto Potts’ through ball, round Scott again and slot home.

Allen almost had his hat-trick on 21 minutes but this time Scott was equal to his shot from just outside the box.

City struck back on 25 minutes with a brilliantly worked team goal that started from outside their own area and, after passing the ball through five players, Pond was able to shoot past Ben Hinchliffe and half the deficit.

And two minutes later they should have levelled the tie but Darren Mullins could only fire his header straight into the hands of the grateful Hinchliffe.

Then almost with their next attack, Fylde restored the two goal lead when Adam Sumner was played in by Allen and his cross was deflected into his own net by the unfortunate Josh Green.

That proved to be the turning point as Amadeu Arnau was taken off with only 36 minutes on the clock and Manager Justin Merritt changed his sides formation to play just three at the back.

This allowed both Allen and Michael Barnes more freedom down the flanks and within three minutes Fylde had a fourth – albeit from a 30 yard free kick which Rowe blasted through the wall and past an outstretched Scott.

Two minutes later it was 5-1 thanks to Liam Tomsett’s expertly taken first goal for the club hitting a Potts’ pass first time to lob the oncoming Scott 14 yards out.

And inside first half stoppage time, Allen missed out on his hat-trick again when his shot was cleared off the line only for Barnes to gather the loose ball ten yards out and have plenty of time to take a touch and fire into the bottom corner to make the score 6-1.

City were kept on the pitch for much of their half time team talk and reverted back to having four men in defence for the second period, which aided their challenge of keeping the score as low as possible, but the damage had been well and truly done by that point.

Rowe should have done better when he was played in one-on-one but sent his side-foot shot inches wide on 47 minutes for Fylde.

A rare sight on goal for the home side saw Bidemi Alofabi head straight at Hinchliffe but it was soon 7-1 on the hour when Rowe expertly brought down Hinchliffe’s long punt up field and lobbed Scott for his second goal of the game.

Rowe and Barnes missed a chance apiece to make it 8-1 but the eighth eventually came with 21 minutes to go. Substitute Danny Lloyd sent a great cross toward the back post where Barnes was there to hammer home his header and his second of the match.

Joe Booth and Lloyd had chances late on to rub salt into very sore City wounds but couldn’t find the target with their efforts so Fylde had to settle for just the eight goals.

Dave Challinor really could not have asked for anything more from his players and summed up his delight after the game: “It was a fantastic result, a fantastic performance from the first minute and we were right at it.

“It was a test for us to come here as the pitch wasn’t in the best condition as the grass was quite long and we had to change our game a little bit and get behind them a little bit more but to come away from home and win 8-1 is fantastic.”

Challinor was also pleased that his side were able to wrap up the result by half time, adding: “The game was over by half time so for the second half we asked them to go out and play as if there was nothing in the game and they’ve done that and got a couple more goals which is great.”