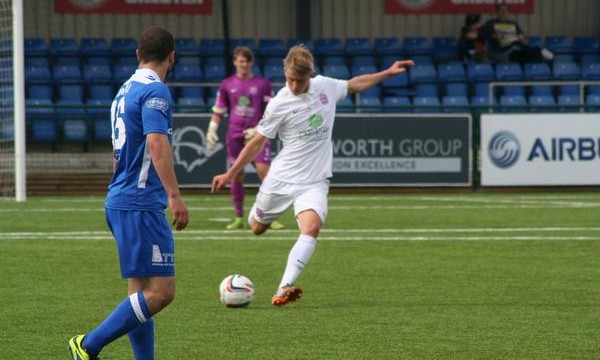 The Coasters lost their first pre-season game with a 3-0 defeat at the hands of Welsh Premier League side Airbus UK Broughton.

Dave Challinor made seven changes to the side that beat Rochdale with only Adam Sumner, Tom Hannigan, Dom Collins and a trialist retaining their places. There were starts for youngsters Jake Gregory, Joey Mullen and Corey Bent while Brad Barnes made his first appearance of pre season.

In the second half he gave 16 year-old Joe Gregory (pictured above) his first team debut and it is clear the youngster – who is signed up as part of the club’s new Football Academy at Blackpool and the Fylde College – is one to watch for the future.

Fylde started brightly with Joey Mullen and Jake Gregory having shots on target, Mullen’s a volley which was charged down by the defence while Gregory’s was a low shot from the edge of the area.

The hosts first chance on goal was a free kick from Tom Field after 8 minutes which went just over the bar. Ryan Wade nearly gave Airbus the lead with a low drive from 18 yards which the trialist goalkeeper did well to tip round the post.

Trialist C nearly gave the Coasters the lead when Corey Bent’s cross field ball landed at his feet and he lifted the ball over the keeper but it rolled just wide of the right hand post.

Airbus took the lead midway through the first half when Jordan BARROW reacted first to Matty McGinn’s parried free kick to finish from an acute angle. Joey Mullen nearly equalised for Fylde five minutes later when his fierce shot was saved well by the legs of James Coates. Airbus UK went in at half time 1-0 ahead in a half where both sides had good chances to score more.

The Coasters started the second half with intent and were denied not once but three times by the Airbus defence and goalkeeper. Firstly Trialist B turned his marker and steered a low shot against the post before Trialist C’s effort was blocked off the line by an Airbus defender before Joey Mullen’s effort was tipped over the bar acrobatically by Coates.

Fylde boss Dave Challinor then made a flurry of changes with Richie Allen,Dion Charles,Casper Hughes,Danny Lloyd,Danny Rowe and Richie Baker came on for Trialists B and C, Joey Mullen,Corey Bent,Jake Gregory and Josh Wilson.

Airbus went close to doubling their lead with two close efforts from Ryan Wignall and Matty McGinn whose 25 yard shot went narrowly wide of the right hand post. Richie Allen had a good chance for the Coasters when he executed his trademark cut inside his marker and his curling effort from the right hand side went just over the bar.

Danny Rowe had a good chance when he hooked the ball over the bar with the target man in between the two Airbus centre backs, however the bounce of the ball was not kind and was difficult to control. Youngster Joe Gregory then made his first team debut coming on for Brad Barnes.

The hosts doubled their lead when Ryan Wignall’s deep cross was converted at the back post by James MURPHY. Wignall had two more chances to score with a low effort tipped round the post by the trialist keeper.

Ellis Healing and Wayne Riley combined well to set up Matty McGINN who curled in a 25 yard effort in extra time to complete the scoring.

The Coasters’ next pre season game is away at Bamber Bridge on Tuesday night.

Man of the Match: Tom Hannigan