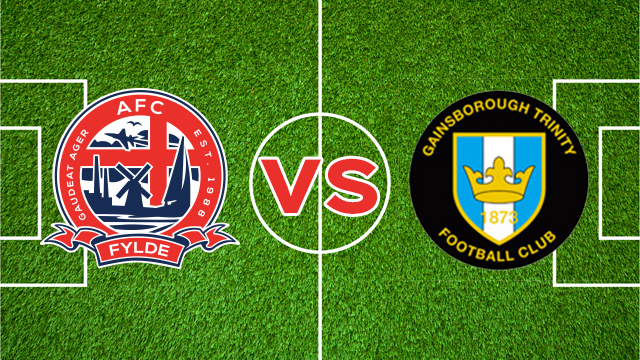 AFC Fylde eased into the next round of the FA Trophy thanks to a comfortable 3-0 victory over fellow Vanarama Conference North side Gainsborough Trinity.

A brace from Danny Rowe either side of Danny Lloyd’s excellent solo strike secured the result and a place in the Second Round for the first time in the club’s history, although centre back Josh Langley had to go off injured with a couple of minutes to go.

It was Langley who had the first real attempt of the game after his header looped onto the roof of the net, and then Forrest then went even closer by heading just wide for the away side.

Richie Allen had an influential game, and his ball into the box was met by Danny Lloyd who headed against the post although he was flagged for offside. Beesley than had a great chance to take the lead for Gainsborough, as his 25 yard effort required a save by Ben Hinchliffe in the Coasters goal.

Josh Wilson, who has been impressive since joining on loan last month had a rasping shot from just outside the area by Jan Budtz while Danny Rowe was unlucky not to open the scoring with a carefully placed header.

However, Rowe was luckier second time around just minutes later. On 37 minutes, a ball in from the left by Adam Sumner was controlled in the box by Joe Booth, before being played into the path of Rowe who couldn’t miss from a couple of yards out.

Langley then had another go at Budtz’s goal with an effort from at least 35 yards out but it went well wide, before Davis tried one from outside the box but it drifted just wide of the post just before half time in a half that was quite even up until the goal.

Gainsborough decided to throw their giant striker Darryn Stamp on at half time, and he caused a bit of trouble but the Coasters defence were able to deal with everything the away side threw at them.

It was The Coasters who started the second half the better, as Richie Allen’s ferocious pile-driver smacked the crossbar from just outside the box, before Josh Wilson tried to place one from the edge of the box but to no avail.

Booth could have doubled Fylde’s lead a few minutes later if he would have been able to connect with a fantastic ball across from the right from Casper Hughes, but the former couldn’t connect.

Davis and Bateson had a couple of attempts at Hinchliffe’s goal, but the Coasters keeper wasn’t to be beaten.

Budtz however, was to be beaten again twice. First, Danny Lloyd collected the ball in his own half, ran past a couple of players before firing a shot towards goal from a good 35 yards out. Budtz couldn’t get to it although he may feel he should, and Lloyd’s effort found the back of the net to make it 2-0 to The Coasters.

Stamp’s major contribution as a substitute in this game was to put the ball in the back of the net – but sadly for him, he had strayed offside after a lovely ball through to him by the impressive Bateson.

Both Danny Rowe and Caspar Hughes were booked for late challenges on Gainsborough’s Davie within the space of three minutes but the fans at Kellamergh Park had to wait until the 82nd minute for the third Fylde goal. It was a second for Danny Rowe, this time a tap in from a couple of yards out after great initial work by Langley who set up Richie Allen to shoot just inside the box, however his shot was saved and it came out to Rowe who again, couldn’t miss.

Stamp was then involved once again, this time it was a booking for the Gainsborough striker due to persistent fouling, this one on late substitute Liam Tomsett. Then in injury time, Josh Langley went down injured and couldn’t finish the game, although after the game, boss Dave Challinor revealed that he should be okay.

‘’We’re obviously delighted to win, we deserved the win and the performance was good throughout. Their goalkeeper has made one or two good saves which on another day would have resulting in us winning by more than the three goals we did win by, but we’ll take the result and move on to the next round.’’

‘’We’re looking forward to the festive period of games against some good sides, and the win today has set us up nicely in the shape that we’ve now won two on the bounce and are unbeaten in six games. We just look at our own game, play to the best of our ability and thankfully at the moment it’s going well for us.’’

‘’Josh Langley had to come off but it’s more of a contact injury, so we’re hopeful that he’ll be alright for Tuesday night’s game at home against Leamington.’’

Man of the Match – Joe Booth