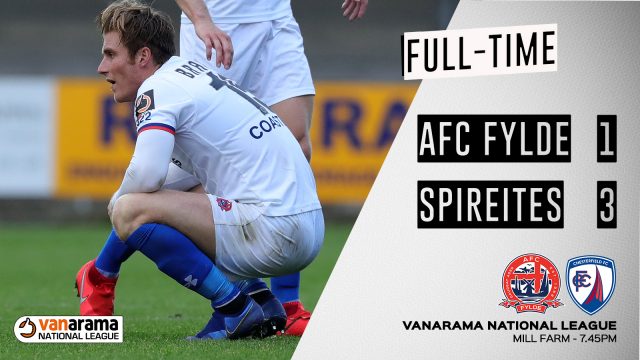 AFC Fylde suffered a fourth successive defeat at the hands of struggling Chesterfield, as they struggled to come back from three second-half goals.

The first half was a fairly lifeless affair, with neither side ever really doing enough to take the lead.

Kyle Jameson had an effort cleared from the six-yard box, before Luke Burke fizzed a left-footed effort from distance over the bar.

The physical Chesterfield side made it hard for the Coasters to create chances, with Jordan Williams being blocked out on each occasion.

New loan signing Sam Hornby was called upon when Alex Whitmore’s misjudged header gave Weston the opportunity to break into the box, but it was well stopped by the on-loan Bradford man.

Denton, too, had a half chance, but after bringing it down on the volley, it was never in danger of beating Hornby.

The second half was when the game really opened up, and after a coming together between Yarney and Bradley which saw both booked, it became a feistier affair.

Chesterfield’s most fluent spell of the game followed, and they capitalised – with Weston striking the ball from distance – his effort deflecting past Hornby, and into the net.

The Coasters struggled to get themselves back into the game, and little after ten minutes later, Chesterfield had another.

Substitute Mike Fondop was released on the right hand side, taking a touch before darting in, and firing past Hornby.

Things soon got from bad to worse, and the game was ended as a contest when, inside the last ten minutes, the Spireites had a third.

An inswinging corner picked out Mike Fondop six yards from goal, who made no mistake heading in for his second of the evening.

The Coasters were on for a second straight home defeat without finding the net, before Tyler Forbes headed home Kosylo’s cross deep into injury time – but it was nothing more than a consolation.

The final whistle soon blew, and ended what was another poor night for the Coasters.