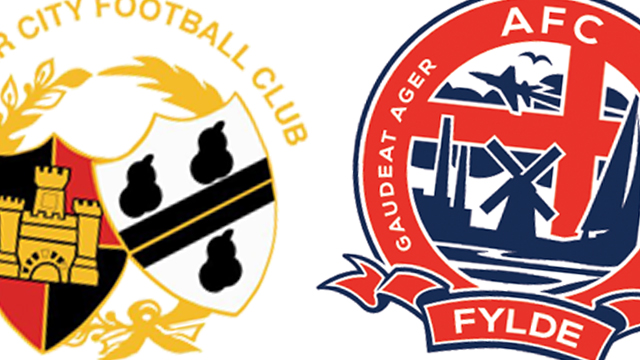 AFC Fylde will take on Harrogate Town in the play-off semi-finals after a 2-2 draw with Worcester City on the final day of the season.

A first half brace from Coasters top scorer Danny Rowe looked to have handed the visitors all three points, but a second half comeback courtesy of goals from Danny Nti and Lee Hughes earned the hosts a share of the spoils.

Fylde could have been well out of sight after a dazzling first half display, but had to settle for a third placed finish in the National League North despite North Ferriby United slipping up against Alfreton Town.

Manager Dave Challinor named a full strength side for the trip to the Aggborough Stadium as the Coasters looked to finish the season on a high.

Fylde sprang into life in their dazzling orange shirts as Caspar Hughes broke down the right and fizzed a telling cross into the Worcester six-yard box, but Matty Hughes couldn’t quite adjust to turn home.

Less than five minutes in and the visitors should have been ahead when Rowe smashed over from Sam Finley’s right wing cross. The Coasters were in the mood and soon after Hughes fired over when well placed in the box.

Richie Baker went closer still when he latched on to Rowe flick on the edge of the area, but his low drilled strike was narrowly wide of the left post. Rowe himself flashed one wide moments later as Fylde looked for an opener.

Worcester looked to fashion an opportunity of their own when a ball over the top reached Alun Webb, but his first time effort 10 yards out was tame. Dion Burton, who was playing in his final match of an illustrious career, tested Matt Urwin with a stringing drive on 20 minutes but there was no way through.

The opener almost came from an unlikely source when defender Tyler Weir attempted an audacious lob from 40 yards that Urwin had to tip over the bar.

The first goal duly arrived on the half-hour mark when Rowe burst forward from the half-way line and tucked the ball past Ethan Ross in the Worcester goal.

The lead was doubled moments later and it was that man again. Hardy raced down the right and into the box before squaring for Rowe who fired home with aplomb.

The frontman should have sealed his hat-trick before the break but flicked his strike agonisingly wide of the near post from Hughes’ cross.

Worcester striker Danny Nti was the first to try his luck after the interval, but his effort from distance looped up and into the grateful arms of Urwin. Full-back Sam Minihan, who scored a belter at Kellamergh Park in the reverse fixture, looked to reduce the arears but his long range shot was just over the bar.

The visitors almost made it three on the hour-mark, but Ross pulled off a sensational fingertip save to deny Finley. The Worcester stopper was called into action seconds later to thwart Richie Baker and Finley was well over with the follow up.

The visitors continued to pile on the pressure and substitute Danny Lloyd should really have put the game to bed when he was picked out by Hardy in the box, but another top save from Ross kept the hosts in the game.

The advantage was halved on 68 minutes when Jordan Murphy’s right wing cross was turned home at close range by Nti.

Hardy had been a constant thorn in the side of the hosts and almost rounded off a fine performance with a goal, but his strike at the near post from Hughes’ cross found the side netting.

The game took an unexpected turn in the hosts favour when Caspar Hughes tugged back Lee Hughes in the area and referee had no hesitation in awarding a penalty. The 39-year-old dusted himself off and smashed home the resultant spot-kick to level the scores.

Winger Lloyd was presented with a great chance to put the Coasters back into the lead but he smashed his left-footed drive the wrong side of the near post from the angle.

Substitute Hughes could have nicked it at the end for the hosts but Urwin reacting quickly to prevent the frontman from touching the ball over the line.