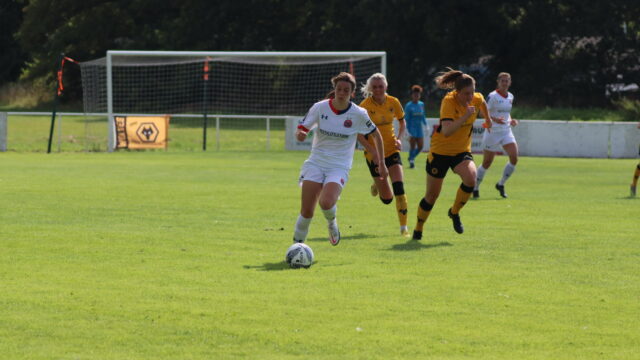 It ended all square at the CKW Stadium on Sunday 29 August as AFC Fylde Women had to settle for a share of the spoils with a goalless draw at Wolves Women FC. Despite creating numerous chances to break the deadlock, the Coasters fell short of scoring that elusive goal to secure all three points in a highly competitive contest in the FA Women’s National League Northern Premier Division.

Fresh off the back of an impressive 2-0 home win against Burnley Women in mid-week, Fylde travelled to the Black Country on Sunday afternoon to take on Wolves Women FC at the CKW Stadium in Castlecroft. The Coasters faced one of their sternest challenges of the new season as they took on a Wolves team in equally electric form. Having defeated West Bromwich Albion Women 2-0 in a local derby last time out, Wolves were eager to continue their flawless start and leapfrog the Coasters at the summit of table. With both sides boasting 100% records coming into the fixture, the stage was set for an exciting duel between the league’s early pace-setters.

The Coasters were quick off the blocks as Emily Hollinshead raced down the right and drew the ball back to Jodie Redgrave, whose first-time shot narrowly cleared the crossbar. The visitors settled into their passing rhythm and immediately applied pressure on the Wolves rearguard. At the opposite end, Wolves’ Ali Miller tried to muster a chance on the break, but the Fylde defence was able to nullify the threat.

Looking to add to her goal tally after netting in mid-week, Wolves striker Tammi George fired in a rasping drive from the right, but Fylde shotstopper Khiara Keating was equal to it. After a clever drag-back in the middle, Redgrave hit a long-range strike that almost dropped underneath the crossbar, but Wolves goalkeeper Shannon Turner stretched high to tip it over.

Countering from a Fylde corner, Wolves playmaker Anna Morphet broke forward with real pace, but the Fylde backline recovered swiftly to clear their lines. Driving through the centre, Redgrave put the Wolves goalkeeper to the test once again with a powerful shot that Turner managed to parry away to safety.

After scoring a sublime goal in her side’s mid-week victory, Amy Hughes returned to the starting line-up in place of Sasha Rowe, who dropped to the bench. Still probing for the opener, Hughes was soon causing Wolves problems and put the ball on a plate for Jess Holbrook, who in turn drilled a shot against the feet of Turner in the Wolves net. Fylde’s next scoring chance came from the left with a pinpoint free-kick delivered by Laura Merrin, whose centre was fumbled by Turner under pressure in the box, yet Redgrave was unable to keep her rebound down.

Approaching the half-hour mark, Hollinshead and Merrin combined well again on the Fylde left, but Wolves midfielder Summer Holmes was on hand to avert the danger. The Wolves backline, commanded by Emma Cross and Anna Price in the centre, was proving resolute in keeping out the Coasters.

Merrin came close to scoring directly from a corner when her inswinging delivery almost dropped underneath the crossbar, but Turner managed to shuffle across to claw the ball to safety. With the game approaching half-time, Morphet worked an opening on the Wolves right and lashed a fierce shot that seemed destined to make the net bulge, but Keating showed amazing agility to jump high to her left and catch the ball. Wolves created another chance before the interval as Ali Miller charged down the right and crossed to Tammi George, but the striker’s towering header failed to hit the target.

With the Coasters keen to build on a promising first-half display, Wolves’ Amber Hughes offered a stark reminder of the host’s attacking threat by rifling an effort narrowly wide. Wolves’ number nine Jade Cross then tried to connect with a throughball, but Keating was sharp off her line to boot the ball into touch. As Wolves curled in a right-sided free kick, Fylde centre back Olivia Fuller only partially headed clear and the ball fell invitingly to Beth Merrick, but she sliced her effort wide.

The Coasters came agonisingly close to breaking the deadlock when Amy Hughes weaved her way past two defenders, cut the ball back to Faye McCoy, who set up Holbrook for a clear sight on goal, but her low drive could only find the side netting. Meeting a corner from the right, Wolves defender Anna Price then jumped the highest in the box to steer a header towards goal, but Keating leapt magnificently to palm the ball away. At the other end, Fylde defender Olivia Fuller joined in the attack and aimed a looping header towards goal, but the ball was headed off the line as the Wolves defence scrambled the ball away.

On the hour mark, the hard-working Amy Hughes was replaced by Sasha Rowe whose calmness and composure on the ball gave the visitors a genuine lift in the closing stages. Rowe continually regained possession and quickly threaded the ball to her teammates up front. The higher press caused Wolves to concede a free-kick in a dangerous position late on. However, McCoy’s direct shot on goal was comfortably gathered by Turner. The Coasters continued to surge forward in search of a late winner, but ultimately had to settle for a share of the spoils. The visitors can take many positives from their strong performance in the Black Country and will be looking to build on their promising start going into September.

Next up, the Coasters are back on home turf as they welcome Hull City Ladies FC to Mill Farm on Sunday 5 September, kick-off at 2.00 pm. Fylde will be eager to continue their early progress when they entertain the Tigers from Humberside.