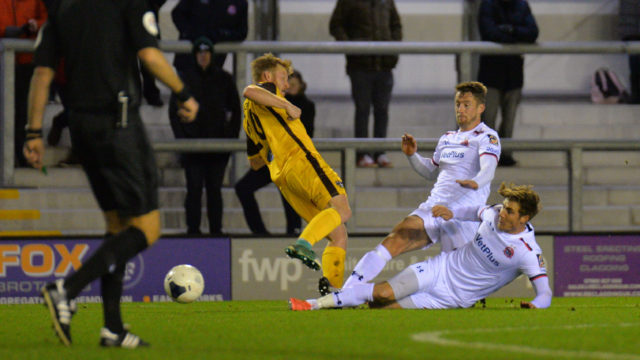 Jordan Williams was sent off at Mill Farm, as the Coasters and Sutton United settled for a point apiece in a midweek stalemate.

The best chances of the game fell the way of the Coasters, most notably Mark Yeates curling an effort off of the underside of the bar just six minutes in, before it was hacked away.

It was a fairly scrappy game, with neither side able to get the ball down in wet and windy conditions, Fylde ‘keeper Sam Hornby having to improvise a smart save after a gust of wind almost caught him out from a cross.

After Sutton had grown into the game through the lively Ajiboye, the Coasters almost broke the deadlock through Ryan Croasdale.

In a half of few chances, it felt like the perfect chance for the Coasters to get their noses ahead in a game in which the sides were separated by just one point.

The Coasters started the second half quickly, and almost found themselves ahead within a minute.

Mark Yeates clever ball picked out Jordan Williams in the box who, beating his man, had just the keeper to beat.

Williams couldn’t pick a side though, and the onrushing Tzanev did well to deny him from a matter of yards.

Almost immediately after, Fylde right-back Luke Burke found himself in space in the box and was a whisker away from opening his goalscoring account, but couldn’t quite steer his effort beyond Tzanev.

Soon after, the Coasters had the ball in the net – but the flag was up on the far side, denying Jordan Williams a headed goal from Mark Yeates’ pinpoint cross.

This was to be Williams penultimate say on the game, as moments later he was shown a straight red card.

A full-blooded 50-50 with Sutton full-back Ben Wyatt seemed honest enough in intention, but the U’s player dropped to the floor – and his teammates demanded action from the referee.

A straight red card soon followed for the challenge, and the Coasters were made to compete with ten men.

The Coasters reverted to a more compact line-up, and despite Sutton taking the upper hand – still threatened.

Dan Bradley’s brilliant cross found Danny Rowe in space in the box – but his guided header was just beyond the post.

Despite seeing more of the ball, the best Sutton could manage was Will Randall’s effort from distance, in a game which soon came to a conclusion.

We were quite in control, and despite one chance in the first half for them, we were quite comfortable.

We tried to get the players to express themselves, and we were unlucky with Yeates hitting the cross bar.

I thought the opposition dug in and worked extremely well, and they’re in good form – credit to them as they dug in.

In the end, the big talking point was the sending off. We’re disappointed as we think Jordan is an honest player, and I’ll need to see it again, but from speaking to a few people it seemed a little harsh.

They had the lions share of possession from there, but we kept plugging away – but it was one of those nights when you see what character we have, and I think they showed it.