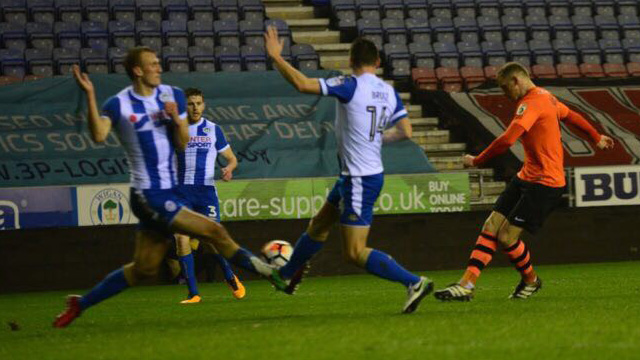 AFC Fylde suffered late heartbreak in their FA Cup second round replay against Wigan Athletic at the DW Stadium.

Danny Rowe put the Coasters ahead midway through the second-half after Simon Grand had cancelled out Ivan Toney’s opener, however Wigan substitute Will Grigg struck twice in the final ten minutes to set up a third round tie against AFC Bournemouth.

Fylde boss Dave Challinor made just one change from the side that held the Latics to a 1-1 at Mill Farm eleven days ago, with Grand replacing the suspended George Edmundson at the heart of defence.

A cagey opening to the match was almost brought to life when Wigan full-back Nathan Byrne burst down the right and crossed low for lone frontman Ivan Toney, however Jordan Richards nipped in at the last to clear.

The defender almost turned provider moments later when his inswinging corner was nodded narrowly over Matija Sarkic’s crossbar by Grand.

The Coasters were more than holding their against their League One opponents and Rowe may have felt he should have done better with his header from Sam Finley’s teasing ball into the box.

Rowe was foolishly allowed space 25 yards from goal on the quarter hour mark and, encouraged by the travelling support, let fly, however his low drive was well held by Sarkic.

The hosts tried to catch Fylde out with a quickly taken free-kick on the edge of the area and although the clever pass eluded the Coasters back-line, Jay Lynch was alert to deny Toney from close range.

Wigan were starting to build the pressure with a succession of corners, one of which was flicked just over the bar at the near post by towering defender and captain Dan Burn.

Despite all the home pressure, it was the visitors that carved out a fantastic opportunity on the half-hour mark when Jonny Smith was sent racing down the left and although he picked out Andy Bond, his teammate could only find the stand with his first-time effort.

However, the opener duly arrived a minute later. Callum Elder beat two down the left before squaring the ball across goal for the lurking Toney to tap home at the back post.

The goal may have knocked the wind out of Fylde’s sails momentarily, however they were far from finished and Rowe saw a fine long range effort tipped wide.

And it was to get better still for the visiting team when they found the all-important equaliser from the resultant corner. Richards’ set-piece fell kindly for Rowe who smashed an effort goalwards that was initially saved by the feet of Sarkic before being poked home by Grand.

Fylde were keeping their shape exceptionally well as the second-half got underway, restricting their opponents – 64 places higher in the football pyramid – to very little in the way of scoring opportunities.

Jack Muldoon was Challinor’s first roll of the dice from the substitutes bench – the winger entering the fray at the expense of Josh Ezewele.

Sub Muldoon went close to giving the Coasters a shock lead soon after coming on when he tested Sarkic with a stinging drive from 20 yards. The keeper spilled his effort and looked to bring down Smith in the aftermath, but the referee was unmoved.

However seconds later and the visitors grabbed what was a throughly deserved goal to take the lead. Richards slipped in Smith down the right, the winger in turn found Rowe unmarked in the centre allowing the frontman to clip the ball home via a wicked deflection.

The Coasters looked to extend their lead when Zaine Francis-Angol broke down the left and teed up Andy Bond who rifled a low strike that sent Sarkic scampering across his goalline.

The Latics hit back with ten minutes to go and a familiar face that did the damage. Gary Roberts whipped in a cross from the left that was neatly claimed by Grigg and lashed home into the far corner.

Fylde hearts were broken just four minutes later when Grigg flicked home his second of the evening after Byrne’s corner fell at his feet inside six yards.

The Coasters almost had a lifeline in the final seconds in bizarre fashion when the referee awarded an indirect free-kick in the Wigan penalty area for time-wasting, however Rowe’s piledriver skipped just wide of the near post.