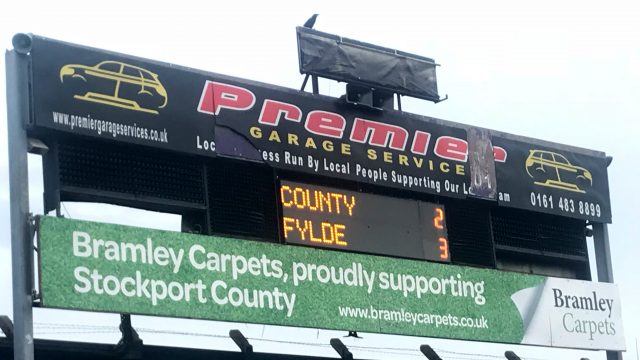 AFC Fylde booked themselves into the FA Trophy final at Wembley Stadium on May 19th, and did so in dramatic fashion at Edgeley Park.

The Coasters made two changes from the first leg, with Alex Reid and Danny Philliskirk replacing Tom Crawford and Serhat Tasdemir, the latter unavailable on international duty.

The Hatters line-up was unchanged, with one change on the bench, where Frankie Mulhern returned to the bench following his suspension.

It was a fast start for the hosts, who won an early corner kick, which they were forced to defend without Jordan Tunnicliffe.

The corner was half cleared by Rowe, before being struck at close range at Neill Byrne – with the appeal for a penalty dismissed.

The Coasters continued the first five minutes with ten men whilst Fylde defender Tunnicliffe received treatment for a bloody nose, returning to the action with a new shirt.

Good work from Nyan Bell out wide saw him look to find Stephenson in the box, before Osborne’s deep cross was met by Duxbury, but his header was easily held by Lynch.

The Coasters, buoyed by noisy travelling support, looked to take charge of the game, as Danny Rowe drove from deep, unleashing an effort over the bar from over 20 yards.

Despite Thomas and Duxbury finding joy on the right-hand side, the Coasters grew into the tie, with Hardy’s early effort deflecting behind for a corner.

The conditions were vastly different from the first leg at Mill Farm, which allowed the Coasters to look to control the game with short, patient passing.

Despite this, the first goal went the way of The Hatters,  25 minutes in after a direct counter-attack saw Stephenson travel brilliantly with the ball.

He released Nyal Bell who, banishing the memory of his two misses last week, fired it low into the net beyond Jay Lynch.

Stockport have the lead as Bell picks up the ball down the left and fires the ball into the bottom left corner. Lynch will probably feel he should have done better there. (1-0)

The Coasters looked to get back into the game immediately, with Rowe earning a free-kick 25 yards from goal.

The number nine got up to take it himself, and couldn’t have hit it much better, sending it crashing off of the underside of the bar, but somehow Hinchcliffe was able to claw it out.

The ensuing melee saw Fylde try to force the ball home, with Croasdale firing it back goalwards.

Two penalty decisions were denied in quick succession, as the initial handball appeal was quickly followed by what looked to be a foul on Philliskitk, but referee Sebastian Stockbridge wasn’t interested.

Just after the half-hour mark, Minivan’s presence continued to cause problems on the right, winning another corner.

The Hatters looked to have doubled their lead, as Ashley Palmer’s towering header hit the back of the net, but he was judged to have climbed up onto his marker illegally.

Stockport were undeterred though, and the now confident Nyal Bell tried his luck from distance forcing Lynch into another low stop.

More patient build-up play followed for the Coasters, as Haughton nipped in and was bought clattering down, just over 20 yards from goal, but this time Rowe’s effort went into the wall.

Haughton, who seemed to be struggling with an injury from the foul, was next to attack, catching an effort on the half volley, forcing Hinchliffe into a wonderful stop.

Haughton’s final involvement was a tame shot goal wards, as he eventually succumbed to his injuries and was replaced by Tom Crawford, before the half-time whistle coming shortly after.

With Crawford introduced, the Coasters reshuffled the pack, and saw plenty of the ball in the second half’s opening exchanges.

Rowe, dropping deep, looked to conduct proceedings, sliding in Hardy and Philliskirk either side of him.

The Coasters were hoping to find that killer pass to open up a Hatters side they hadn’t found the net against in over two hours of football.

Hardy, who had started his third game of football in a week, looked sharp, running beyond the Hatters defence and remaining tidy in possession.

The chances continued to build-up for the Coasters, as James Hardy picked out Danny Philliskirk in the box, with his effort stopped well by Hinchcliffe.

Despite the early second-half dominance, it was very nearly 2-0, as Osborne was picked out at the back post unmarked, only for him to miss the target completely with an off-balance header.

This prompted another Stockport substitution, as Warburton replaced Darren Stephenson, who had a quieter afternoon compared to last weekend.

Warburton’s introduction was almost made immediately known, as he and Osborne combined well, with the final effort from Warburton eventually saved by Lynch.

The Coasters persistence was eventually rewarded though, as James Hardy was bought down in the box following a corner, and the referee pointed to the spot.

Danny Rowe picked up the ball and looked his former teammate Ben Hinchcliffe in the eye, before sending him the wrong way, and levelling the tie against his former club. 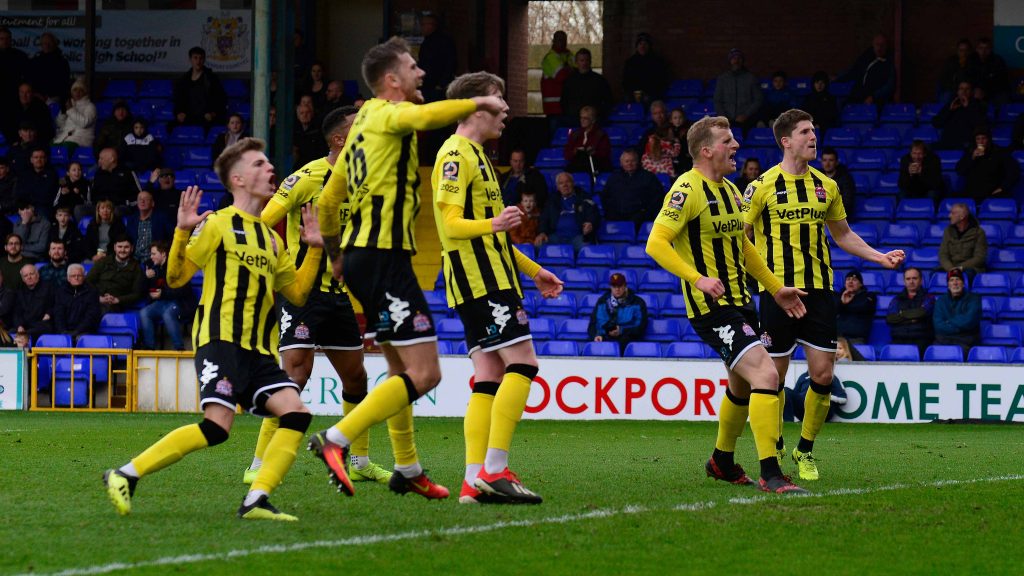 The Coasters continued in the driving seat, with Hardy and Crawford combining well to unlock the back four, winning plenty of corners and free-kicks.

Stockport settled themselves, and looked to break down the left, with Osbourne winning a free-kick after getting the better of Birch.

The free-kick was well cleared, and Alex Reid was sent long on the counter – screened this time by Jamie Stott, who went into the book for the challenge.

It became an end-to-end encounter, as you’d expect with the prize at hand, with Stockport finding plenty of space on the left wing through Osborne, who moved into the wide channels.

However, with five minutes to go, it was advantage Fylde, as Rowe played in Francis-Angol, who slid it into Hardy.

Hardy wasn’t able to control it though, and instead it fell into the path of Ryan Croasdale.

Croasdale was only too happy to lash it home from 10 yards, giving the Coasters a lead for the first time in the tie.

The euphoria was short lived however, as The Hatters found themselves level with just two minutes to go.

Osborne’s in-swinging corner evaded everyone and ended up at the backpost, only to be awkwardly bundled in by Palmer, and Edgeley Park erupted.

If Stockport County thought they had forced extra-time however, they were mistaken as the Coasters restarted the game and, once again, went straight on the attack.

The ball fell to James Hardy on the edge of the box, who controlled it, before sliding it into  Alex Reid, who had worked tirelessly all day to create chances.

This time, he didn’t need to think twice, as he curled the ball low inside the box, past Hinchcliffe and in off the post. 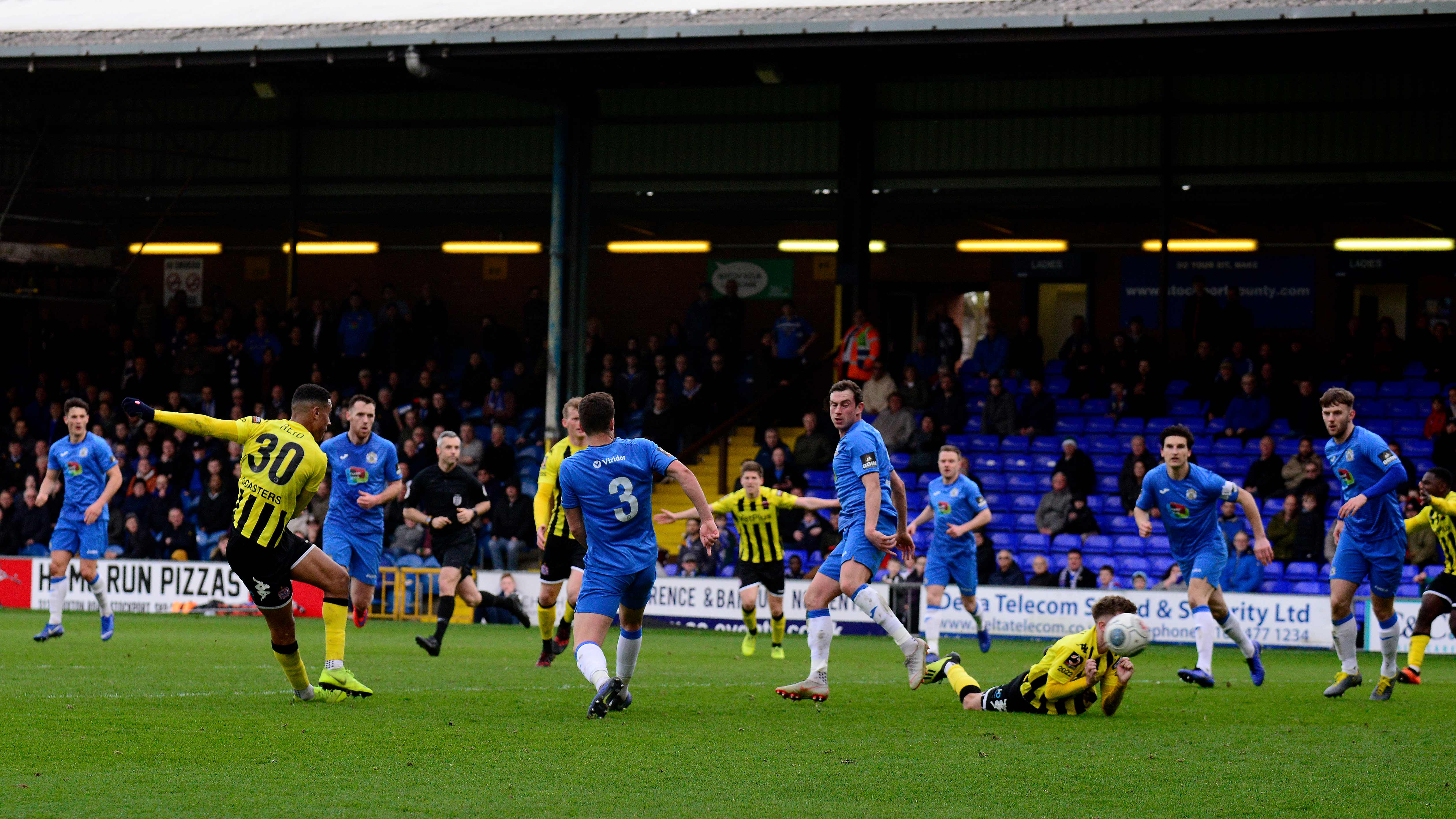 The travelling Coasters fans went crazy, as their team had managed to score with just one minute on the clock, and seemingly book their place at Wembley.

The game was far from over, and as the officials indicated a minimum of five minutes added time, Fylde had to dig in deep.

Deep into added time, Timi Odusina came on to replace Arlen Birch as Fylde looked to wind down the clock.

Finally, the referee blew his whistle and bought the game to an end, meaning AFC Fylde return to Wembley, and bid to be the first team in history to win the FA Vase and FA Trophy.

With interviews to follow, we’ll leave you with the reaction from the full-time whistle from the players, fans and staff…