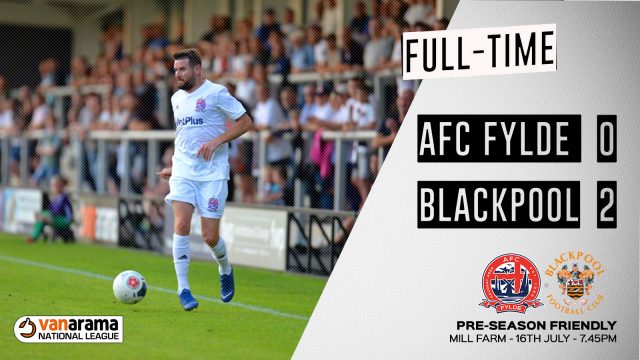 Two second half goals saw the Coasters fall to a 2-0 defeat to neighbours Blackpool FC, in the final pre-season game at Mill Farm.

Further minutes were given out across the squad, with defender Alex Whitmore captaining the side on his first start.

The visitors started the game on the front foot, with Tollitt creating early openings, and sending a close range shot goalwards, which trials goalkeeper Dan Lavercombe did well to stop.

Despite trying to counter through Haughton and Kosylo, Blackpool went close to scoring again, as Ryan Edwards was found unmarked, before heading over the Fylde bar.

The Coasters grew into the game however, and after Danny Rowe’s free-kick was deflected behind, they enjoyed their best spell of the game.

Space opened up for AFC Fylde Academy graduate Sheldon Green, who did well to win the ball on the break and play in Kosylo – but he was bought down by a meaty challenge from Curtis Tilt.

Fylde had perhaps their best chance of the opening half with ten minutes to go, as Kosylo danced into the box before being dispossessed.

Haughton tried to steer the loose ball home but was blocked, before Green had a nibble too – but his stabbed effort was stopped by Mafoumbie.

Fylde couldn’t make this bright start pay though, and Blackpool soon had the lead.

New signing Sullay Kaikai’s fantastic delivery picked out Delfouneso at the back post, who guided a fantastic header back across Lavercombe and into the net.

With the centre-halves swapping at half time, Neill Byrne and Callum Grogan stepped up in place of Whitmore and Jameson.

It was nearly a very memorable start for the pair, as Neill Byrne’s flick from a corner found Grogan, who in turn sent an effort bouncing back off the post.

The game quickly turned on its head though, as Blackpool’s new signing Sullay Kakai whipped in a fantastic ball to the back post.

Nathan Delfouneso rose highest, and did well to guide his header back across goal, and beyond Lavercombe into the net.

The momentum shifted, and a long ball picked out Kurt Willoughby on the run – but he misjudged his chance, and wasn’t able to get a shot away.

The Seasiders had soon doubled their lead after a cross into the box wasn’t cleared, and former Solihull Moors forward Adi Yussuf was there to poke it beyond Lavercombe.

There were signs of improvement for Fylde, with Mark Yeates and Dan Bradley looking threatening through the middle – the latter playing an inch-perfect cross to Willoughby, who couldn’t capitalise.

Ryan Croasdale shortly headed an effort which was well saved, before Bradley had an effort turned behind from the edge of the box – but the Coasters couldn’t claw one back.

Alex Whitmore on fitness, his first start, and the season ahead.