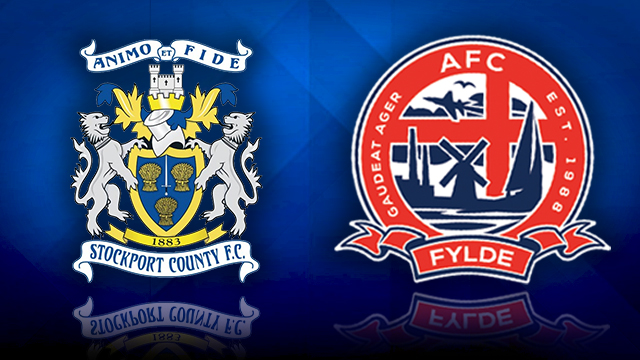 Scott Spencer thought he had nicked a point for the hosts in added time after cancelling out Dan Bradley’s early goal, however top scorer Rowe would have the final say as the Coasters moved clear at the top of the National League North.

Manager Dave Challinor was forced into one change from the victory over Gainsborough Trinity at the weekend with defender Dom Collins coming in for the injured Steve Williams.

Fylde made a fantastic start in their dazzling orange shirts, dictating play with passing worthy of league leaders, however it was the hosts that created the first real opening of the game when Josh Amis fired narrowly wide with a snatched shot from 20 yards.

Stockport were the width of the post from taking the lead in the 13th minute. Sam Minihan cut the ball back from the byline and John Marsden rattled the woodwork with a rasping volley.

The match was becoming an increasingly feisty affair with both Collins and Danny Holmes cautioned for poorly timed challenges.

However, seconds after Holmes’ booking and perhaps against the run of play, the Coasters broke away and took the lead. Bohan Dixon raced through on goal and unselfishly squared to Bradley who cutely lifted the ball over former Coasters goalkeeper Ben Hinchliffe.

The record signing had the taste and rose well to James Hardy’s cross on the half-hour mark but could only nod into Hinchliffe’s arms on this occasion. Rowe slammed a thunderous effort on the turn just wide moments later.

Stockport looked determined to make Fylde work for the points as they continued to pile on the pressure and Marsden not far off with an effort from the edge of the area.

Another familiar face Danny Lloyd was aiming to come back to haunt his former employers as he powered down the left but his eventual strike was narrowly over Tony Thompson’s bar.

Dixon stretched his legs once more shortly before the break, galloping the length of the Stockport half – and past half the team – and was incredibly unfortunate to see his low strike kept out by Hinchliffe.

The physical nature of the match continued after the break with Amis manhandling keeper Thompson as the hosts searched for a leveller.

Dixon was running the Stockport backline ragged and was again close with a sublime curling effort that sailed a foot wide of the far post.

County’s pressure was building as the game wore on and Amis could only find the side netting with an improvised effort from Minihan’s deep cross on the hour. Lloyd tried his luck with an ambitious volley from 20 yards that flew just over before Stockport had their best chance of the evening.

Minihan whipped in a delightful cross to the back post and Thompson pulled off a sensational save to deny Amis at point plank range.

Play was halted for almost ten minutes after a nasty collision between Collins and Scott Duxbury, which resulted in the latter being stretchered off with a suspected head injury.

The stoppage in play halted the host’s momentum and Bradley looked to take advantage with a whipped effort from 20 yards that drifted over the top.

County continued to knock on the door without creating much in the way of scoring opportunities but the fourth official ensured it was to be a nervy end for the visitors, putting up ten minutes of added time.

Just three minutes into those ten and Stockport finally broke Fylde’s resolve. Substitute Spencer received the ball on the 18-yards line, took a touch and placed a precise strike into the bottom right hand corner.

However, there was to be one final twist in the game in the eighth minute of injury time and it sent the visiting fans into delirium. Fylde were handed a free-kick 30 yards from goal and deadball specialist Rowe stepped up to curl home into the top corner in spectacular fashion.