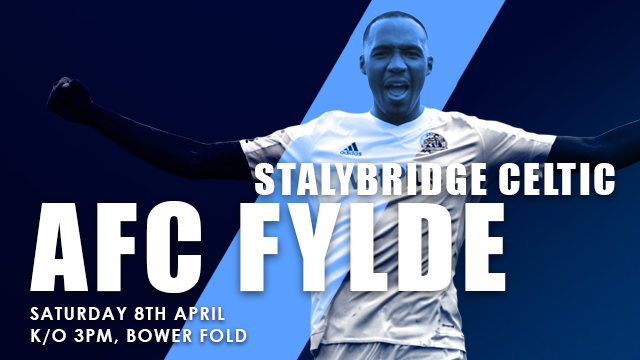 Fylde fell behind after Danny Wisdom headed home but were back on level term when Danny Rowe tucked away the Coasters’ 100th league goal of the season.

The Coasters are now just six points clear of second-placed Kidderminster Harriers, who travel to Stalybridge themselves on Tuesday night for their game in hand.

Manager Dave Challinor made just one change to the side that demolished Darlington 4-1 the previous weekend with David Morgan replacing the injured James Hardy in midfield.

Rowe had the ball in the back of the net inside eight minutes when he latched on to a ball over the top and lobbed the goalkeeper, however the linesman’s flag was raised.

Midfielder Dan Bradley nodded narrowly wide from Sam Finley’s corner moments later as the Coasters pressed for an opener on a difficult pitch.

The midfield man should have opened the scoring with his next chance just short of the 15-minute mark when he was played clean through by Rowe, however he almost had too much time and his eventual strike was well kept out by the legs of Grant Shenton.

The away side were causing all sorts of problems and Shenton had to be on his toes to keep hold of Bohan Dixon’s header at the back post.

The chances kept on coming and Finley spurned a gilt-edged opportunity to break the deadlock. Andy Bond raced clean through and although he took too long to get his shot away, he managed to find Finley on the six yard line but his scuffed effort was well saved.

Missed opportunities were to prove costly when the hosts took a shock lead on 23 minutes. A corner from the left was prodded goalwards at the back post and Danny Wisdom got his head to the loose ball and guided it into the bottom corner.

The lead was short lived however and it was a milestone goal for Rowe. The front man controlled in the area and put captain Matty Hughes on his backside before rolling the ball inside the near post to equal the all-time goalscoring record for the league.

Stalybridge carved out a rare opportunity when a cross into the box landed at the feet of the unmarked Wisdom and Rhys Taylor had to react quickly to prevent the left-back from doubling his tally. The Fylde stopper was forced into another decent save at the far post after Wisdom’s low cross had found the lurking Danny Pilkington.

A poor goalkick present Dixon with a chance to shoot, but after beating his man on the edge of the area, the midfielder dragged his left footed strike across goal and wide.

The hosts started the second half brightly and should have restored their lead when Roberts fired a low ball across goal that Bishop couldn’t convert at the back post with the goal gaping.

However, Celtic didn’t have to wait long to find their second goal. Less than ten minutes after the restart, Pilkington beat the offside trap and rounded Taylor before sliding the ball into the open net.

Momentum was building for the hosts and Adam Mather really should have turned home at the far post after Pilkington’s initial strike had been palmed away by Taylor. Pilkington was proving a real menace to the Fylde backline and was a whisker away with a diving header that flew across the face of goal.

The Coasters were struggling to get a foothold in the game after the break and Bradley’s strike from distance that whistled over the bar the only real chance of note.

Fylde were being restricted to long range efforts and Shenton made light work of Rowe stinging attempt from 25 yards as the minutes ticked on.

Bradley had a late chance to salvage something from the game when he latched onto a flick on from substitute from Matt Blinkhorn however his strike from 20 yards was straight at Shenton.

Substitute Porya Ahmadi almost wrapped up the points in the dying second but his looping effort from the edge of the area drifted narrowly wide.